Destroy the Overmind with Dark Templar

For this mission Kerrigan convinces the Dark Prelate Zeratul to help her destroy the Overmind on Char. You’ll have access to Protoss Gateways that can produce Dark Templars. If you lose the Gateways you’ll lose the mission.

The UED and Zerg are working together to protect the Cerebrate. They will send out units to attack your base in unison so base defence can be a little tricky. You’ll need up to 8 Sunken Colonies both to the north and south of your base. Half a dozen Spore Colonies should be spread throughout your base, especially near the Gateways, Hatcheries and minerals.

Taking a look at the map below you’ll see that there are a few places that you can almost immediately expand towards. Your starting base is the one closest to the south west corner. On a plateau just to the west of your base is a small mineral patch. Once you have the transport upgrade for your Overlords you can drop off a few Drones and build a Hatchery there.

There’s another free mineral patch on the souther side in the middle of the map. You may find this a little harder to defend if the enemy decide to attack so make sure you have units to spare for defence.

The Terrans to the north and the Zerg base directly to the east are also good options for expansions. The Zerg base is more open and harder to defend, although if you have flying units it is closer to send reinforcements.

The last mineral patch that you may want to grab before heading for the cerebrate is in the south east corner of the map. It’s protected by a few Lurkers so send over an Overlord and a few fighting units before setting up the Hatchery.

Air power seems to work fairly well for this mission although you’ll need a combination of Guardians and Devourers/Mutalisks. The Devourers are slow to fire but release spores that when attached to an enemy unit do additional damage. Each spore does 1 damage per additional attack and a maximum of 9 spores can attach to each enemy unit.

There’s no need to clear out the entire Terran and Zerg bases. Bring your forces to the south east corner of the map and then up to the Cerebrate. Let your Guardians clear the way and pull them back when you face enemy flyers. 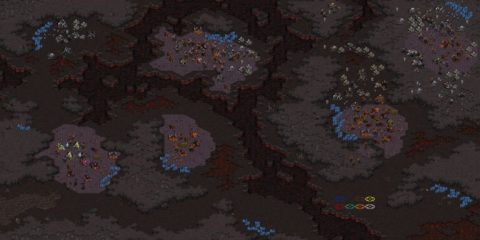