Destroy the Protoss Temple. Once it’s destroyed you’ll need to bring the Khaydarin Crystal to the Beacon next to the destroyed temple.

You begin with the basics of an outpost on the southern border of the map. The Temple is far to the north. There are two Protoss outposts to the west and east. You should destroy the Protoss bases first while you build up your horde. You can then take over the resources of those bases.

Full Circle is really not that hard if you focus on building a combination of Zerglings and Hydralisks. You’ll be able to get out a large force quickly and the Protoss won’t have time to react.

There are plenty of resources so make sure you have lots of Drones on gathering duty. Upgrade the Zerglings and Hydralisks as much as you can until you’re ready to go for the central Temple.

The base to the west was my first target. You can destroy it completely with about 3 groups of mixed units of Zerg and Hydralisks. The base on the eastern side is about the same size.

Once the outskirting Protoss bases are destroyed pull all of your units back to the center. 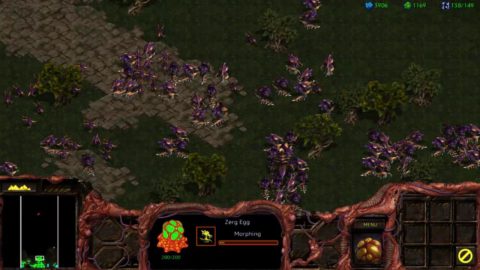 When you have 6 or 7 groups send them all up towards the Temple. Once the Protoss have been wiped out and the Temple destroyed bring the Drone with the Khaydarin Crystal up to the Beacon by the temple to complete the campaign.