You begin in the north west corner of the map with Raynor in a Vulture and 8 Marines. Bring them down to the south to find Kerrigan. Once you meet her the path to the enemy Command Center will be shown on the map.

Follow the path and destroy the Wraith. Make your way towards the enemy Terran camp and when you get close leave all your units except Kerrigan outside. Cloak Kerrigan and quickly dash her past the first Turret. Run up the ramp past the Barracks and bring her to the marker next to the Command Center. 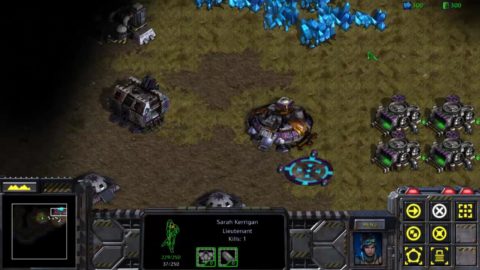 She’ll kill the commander and most of the base will convert to your side. The purple units and buildings now belong to you. The white are still enemies. Kill the remaining white Marines and Bunkers.

The white base is on the southern edge of the map but there’s water separating you from them. You’ll need a few drop ships to take your ground units over.

Four Dropships should be plenty. Train Marines and build Vultures and send them over to the eastern side of the enemy peninsula. This is where the enemy SCVs are gathering minerals. Destroy them and push your units towards the west.

You can send your Dropships back for more reinforcements if you need to. Destroy all enemy buildings to complete the mission.