In this mission your objective is to destroy the Nod Bio-Research facility where Kane is supposed to be working. Once you build the Advanced Communication Center you’ll have access to the Ion Cannon. Both 13A and 13B are exactly the same as far as I can tell. 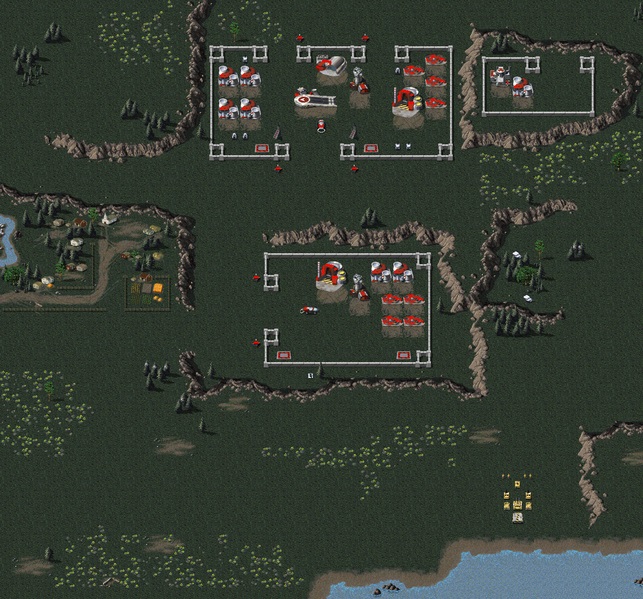 Move your MCV west, in between the two Tiberium Fields and then build your base. Start with a Power Plant and Refinery as usual and then build a Weapons Factory. Start building Light Scouts to protect your base from Infantry.

For this strategy you only need to focus on defending your base. Build some Guard Towers and Tanks to keep the enemy back. When you have the resources build an Orca. Send out a Light Scout to the cliffs in the northeast. You should be able to see the square inside the Nod base on the hill. Send the Orca to land on the hill and move it towards the research facility one step at a time until it’s revealed.

Build an Advanced Communications Facility and wait for the Ion Cannon to charge. When it’s charged use it to take out the Research Facility.

Your first task is to take over the central base. Build an APC and fill it with 3 or 4 Engineers. Send out a wave of Tanks and Light Scouts to destroy the Turrets and Nod forces in the center base. Bring your APC in and take over the Refinery, Hand of Nod and other buildings.

The center base is quite well defended and only has a single entrance. Build some Advanced Guard Towers as the Nod forces will send out waves of units.

Getting past the Obelisks of Light guarding the main base is tricky. Luckily there are a few other options for completing this mission as you only need to destroy the Bio Research Facility which is on a ridge to the east of the Nod base.

You can either build a few Orcas to carefully fly around to the right and then up to the facility where they can land make strikes on the facility.

The other option is to build Rocket Launchers and have them target the south east wall of the Nod base. Have them move further north, destroying the walls as they go. Soon they’ll be able to target the Research Facility on the ridge to the east.

Once the facility is destroyed the mission will be completed.

The Right path uses the same map as the left path so refer to the Left Route walkthrough for how to complete this mission.

Next: GDI Mission 14: Fish in a Barrel