This is a small map and I recommend taking the Black Knight as a bonus as it will help you deal with the surrounding neutral creatures. You have 3 months to bring the Spirit of Oppression to Stonecastle. This is plenty of time to explore the entire map so there’s no rush.

Go to the Hut of the Magi to get a view of Stonecastle. Don’t enter the castle with your main hero until you are ready to end the mission. Explore your little area and by the end of the second week you should be ready to send your main hero through the garrison and to Stonekeep. Attack the castle to wipe out Red but don’t enter with your hero. 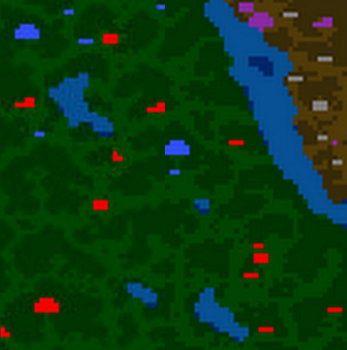 Season of Harvest and Corporeal Punishment can be done in any order. The order will make a difference to what quest items and rewards become available for the final mission. I choose Season of Harvest first because it’s the easiest.

You have 3 months to gather 2,500 Skeletons across all of your armies. Choose the Vampire’s Cowl as your starting bonus as the buildings can be constructed later. The Vampire’s Cowl gives you a bonus to Necromancy.

You begin on a small stretch of land in the northeast corner. Flag all the mines, kill all the creatures and collect all the units you can. From the Necropolis build a ship and sail it across the river to the other side. A hero with Vampire Lords and a growing stack of Skeletons should be all you need.

Keep an eye out for the Spyglass. This goes with you to the final mission of the campaign.

Once you have the resources send out a second hero. You should have plenty of time to gather the army of skeletons. If you’re getting close make sure you have a Skeleton Transformer in your town and convert all other units to Skeletons.

To win this scenario you need to defeat the leader Mot. He won’t stray far from the main Necropolis town in the southeast. It will be easier to capture the other 2 red enemy towns, build up an army and then go after Mot. The starting bonuses are not worth mentioning. The 25 Zomies are the best option.

Build up quickly to Vampire Lords and a stack of Skeletons on two heroes and send them out to take over the two red towns to the east and southwest. Mot will remain near the Necropolis in the southeast so build up a force of Vampire Lords and Black Knights.

If you have time send a hero out to the whirlpool in the sea. It takes you to the underground. Explore this area to find the Speculum which goes with you to the final scenario of the campaign. When you’re ready send your best hero to defeat Mot to win the mission.

From Day to Night

For this scenario you need to capture all towns and defeat all enemy heroes. Your starting bonus is 3 Ghost Dragons. This mission will be much easier if you strike first with the Ghost Dragons and pick up the rewards for bringing either the Spyglass or Speculum.

You begin with 3 Necropolis towns. Your main hero with the Ghost Dragons will be in the middle. Send him south to take out the garrison. Make sure you keep all of the 3 Ghost Dragons alive. Continue along the road to the south until you find the white building. Go west and then north to the guard posts. 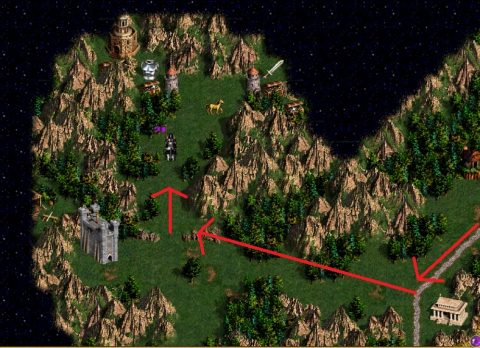 I recommend bringing a second hero along so you can split up your Dragons. One hero can go to the east and then north and the other to the west and then to the center town. Finish off the last town in the north west and wait for the enemy heroes to die off to complete the campaign.