Playing with Fire is a campaign about a Fire Witch called Adrienne. She uncovers a plot by a Death Knight to turn the locals into an undead army. You must turn Adrienne into a powerful witch, deal with the undead and ultimately defeat the evil Death Knight.

Adrienne starts the campaign with Expert Fire Magic and the Inferno spell in her spell book. This is a powerful spell that will be much more useful later in the campaign. 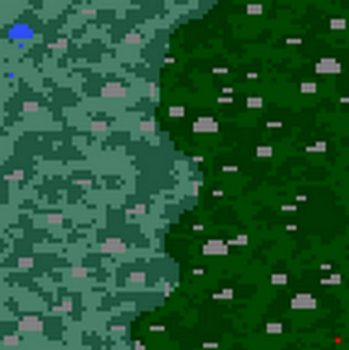 For the first scenario you need to completely wipe out all creatures on the map. If you leave the blue enemy alive for a while they may help you kill off some of the creatures on their side of the map.

You begin with either the Still EYe of the Dragon, Quiet Eye of the Dragon or the Talisman of Mana as a starting bonus. Adrienne is limited to level 12 for this mission.

From the start make your way up to the first Castle town to the northwest called Brastleton. There are another 3 Castle towns on this side of the map. You want to capture them all before heading through the garrisons to the western side of the map with the Fortresses.

Wipe out the Blue enemy and then finish sweeping through the map to kill off all the creatures. Build up Adrienne as much as possible as well as 3 other heroes who will be joining you in the next scenario.

March of the Undead

March of the Undead is a large map with the objective to flag all creature dwellings. There are an awful lot of dwellings on this map and some of them are not that easy to spot. There’s also 2 enemy factions that you need to deal with.

Here are the total number of dwellings:

When you’re in your town you can right-click on the creature icon and it will tell you how many external dwellings you have, along with the base town growth.

From the start head across to the east and then up to the north to take out the tan player. From here you can send a hero underground to start flagging the dwellings down there. Have another hero gather a larger army, take a boat into the whirlpool in the lower lake to appear in the northern lake. From here you can drop your hero off right by the doorstep of one of the purple towns.

Take out the other purple towns and kill off the heroes. You’re then free to roam around the map and flag all remaining creature dwellings.

The Burning of Tatalia is an extra large map with 4 enemy factions. It will take you some time to explore the entire map. Visit the Hut of the Magi nearby and you’ll be shown a large portion of the map.

You begin in the southeast corner of the map. I found it best to split my heroes into two groups. One group going west and the other north. The lead hero in each group will hold the army, the others help to gather resources and to scout.

Now that you have a large portion of the map under your control gather up your forces and take out purple to the north. Send a ship across the water and finally deal with blue. Once all enemies have been defeated the campaign will be complete.

Back: Festival of Life          Next: Foolhardy Waywardness