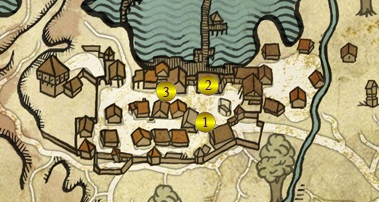 After your fight with Letho in The Asassins of Kings quest he’ll threaten to kidnap Triss and force her to teleport him to Vergen. This quest will be dramatically different depending on whether you helped Iorveth or Roche during the fight.

If you gave Iorveth a Sword when the Blue stripes attacked he’ll meet you on the way to Flotsam but can’t enter the city. The guards at the city gates may let you in or you may need to persuade them depending on how things went in the Indecent Proposal quest.

Inside the town the place is a mess. There’s fire everywhere and the humans are trying to eradicate the non-humans. There’s a Dwarf (#1) being attacked by the humans. Intercede to help him out if you want and then make your way to the Tavern (#2) where you’ll see Dandelion defending two female elves from a crowd of humans. Either join forces with him or use Intimidate or Axii to convince them to leave. Speak with Dandelion for some more information about the riot and what might have happened to Triss.

Once you leave the Inn you’ll spot more Dwarves (#3) in trouble. If you help them they’ll return the favour and give you a reward in the next chapter.

Make your way up to Sile’s room above the Tavern. There’s a lot of blood around. Search the room for clues until you find the peephole in the wall. go to the room next door to see who might have been spying.

Margot is in the next room and she tells you that Triss and Cedric enter Sile’s room and use the device to see who Sile spoke with. It was the sorceress Philippa. You’ll take control of Triss for a short while as you reply the events of her talk with Philippa. You can only ask a few questions so chose the ones you’re most interested in.

After the cutscene you’ll need to search for Cedric. He was last seen injured and leaving the town of Flotsam. Use a Cat’s Eye potion to help you see the trail of blood and follow it out into the forest. Once you find Cedric he’ll tell you what happened to Triss, that Letho kidnapped her and they teleported near to the dwarven city of Vergen. He also gives you a clue as to how to restore more of your memory.

If you helped Roche then Loredo will greet the two of you as you enter the town of Flotsam. He’s filled with joy and has put together a celebration for the capture of Iorveth. He offers you a drink. You can either take a drink or head straight for the Tavern (#2) to find out what happened to Triss.

Inside the Tavern you’ll find Dandelion telling stories to the townsfolk about your daring deeds. You can either have a drink with them or go with Dandelion immediately with him to Sile’s room above the tavern.

Sile’s room is filled with blood and a dead bodyguard. Search around for clues and look at the wall to find a peephole. Head into the room next door to see who’s on the other side. You’ll find a prostitute named Derae. She says she was spending time with Margot and heard strange noises in the room next door. It was Triss and Cedric. Triss was interested in using the device to find out who Sile has been talking to. For a few minutes you’ll take control of Triss as you speak to Dethmold, the sorceror working for King Henselt, through the megascope.

Darae will tell you that Margot has not been seen since she went to her room. This starts the small Margot’s Disappearance side quest.

Cedric is also missing and was last seen fleeing Flotsam. He appeared to be wounded. Use a Cat’s Eye potion and follow the trail of blood. You’ll be attacked by Scoia’tael along the way because you refused to help Iorveth.

When you find Cedric he’ll tell you how they broke into Sile’s room and how Triss was then captured by Letho. Before passing away he also gives you some clues as to how to regain some of your past memories.