For a full list of trineangles watch the video above. From the beginning head to the right and swing across the spikes to the other side. Break the boxes under the ramp and run up to the first checkpoint. 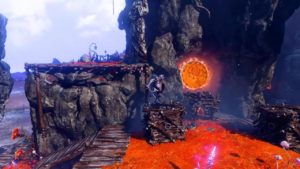 You’ll notice the bridge on the other side is stuck up. Either shoot the vines holding it up with an arrow or charge a box into it with Pontius. Run across to the second checkpoint.

To open the gate in the next section pull the two levers out with Zoya’s rope. Tie one around the pole and the other to a wooden box. 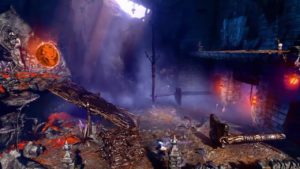 Go through the gate to the pond room. Throw the metal ball against the wall to the right to reveal more trineangles then dive into the water. Swim around to the right. There’s a secret tunnel in the far wall. Swim through for a small cave wtih 7 trineangles. Head back out and climb onto the platform for the third checkpoint. 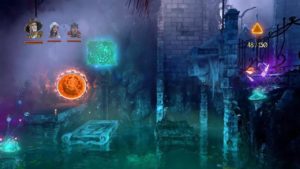 Jump on to of the wall and over to the right for more trineangles.

Place a box on one of the horns over the spike pit. Grapple onto the other horn to pull both of them down and open the door behind. Swing into the alcove to pick up the trineangles. 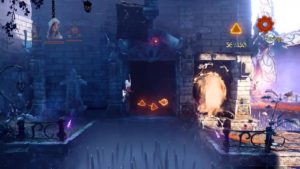 Continue to the right. Place boxes on the spikes so you can jump over them. To the right are more trineangles. Continue forwards towards the windmill. Break the vines at the base to knock it over and use it like a bridge to the next checkpoint.

The giant golem needs to be defeated in a few stages. When he bangs the log against the wall a piece of metal will come up revealing a red button underneath. 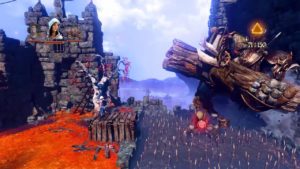 Shoot an arrow at the red button. The golem will drop low enough that you’ll be able to jump onto the log. Use Pontius to attack and break the golem’s arm. This will get his attention and he’ll start throwing boulders at you. Hit him in the face until his face breaks. He’ll swing his arm a few times and then walk out of the spike pit. Now’s your chance to strike him in the heart and defeat him.

Continue to the right, take out the creatures and climb up the wall to the next checkpoint. Enter the building and  collect the trineangles scattered around the room and then swing across the spike pit to the right. Jump up the wall and over to the right.

Climb the wall behind you to get more trineangles. To get to the trineangles behind the movable wall grapple onto it with Zoya’s rope and tie it around the wooden beam. It’s easier if you jump over the beam first and then go back under it. Hop around the wall to reach the big trineangle. 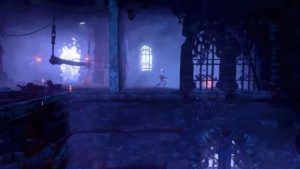 Continue to the right where you’ll find a strange creature fishing. Tie one end of the rope to the end of the fishing line and the other to the line with the fishing hook. The creature will catch a fish and walk off.

Continue past the hut where you’ll be attacked by more creatures. Drop down on the first wheel and then over to the second wheel. Use Amadeus to smash a box onto one of the wheels platforms to make it go around. Hop off at the top right.

Head all the way to the right, take on the creatures and then go down the slope to the next checkpoint. Shoot an arrow to break the vines around the platform and then pull it down with Zoya’s rope. Hop onto it before it goes back up and ride it up to the ledge on the right. 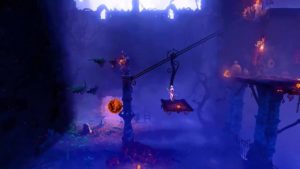 Up the top either tie a rope to the large swinging platform or stand on it and run from end to end to get it swinging. You can use the momentum to climb up the wall and then jump across to the ground near the gazebo. Break the vines around the gazebo and walk down.

Take out the creatures and then press the button in the middle to release fireballs. Deflect one on the wall ahead of you and slightly to the right to reveal a large trineangle. 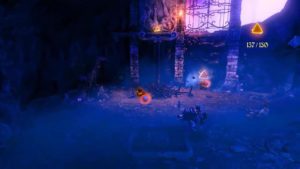 Place a box on the platform to lower it and simultaneously open the gate above it. Jump through to the final section of this chapter.

Three movable platforms need to be placed in order from lowest to highest so you can jump across to the other side. Before you place them bring the highest platform to the left side and jump on it to grab a large trineangle. You can hold them in place by using Zoya’s ropes and wrapping them around the wooden poles on either end.

Jump over the platforms to the other side to complete the chapter.

Next Part: A Forgotten Parchment (Mini-Chapter 1)