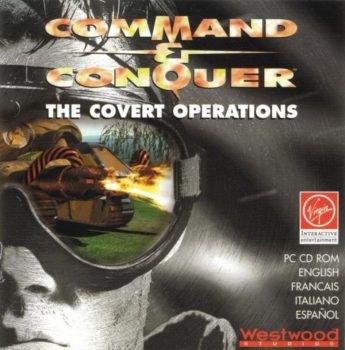 The Covert Operations includes 15 new missions for both GDI and Nod forces. There are 7 new missions for GDI and 8 for Nod. Some of these missions are very tricky and generally much harder than the original Command and Conquer campaign.

The Covert Operations expansion pack was released in 1996 and does not bring any new changes to gameplay. The new missions do not need to be played in order.

Click on ‘New Missions’ from the menu and you’ll be able to select any of the Covert Operations missions. See below for a full walkthrough on all of the missions.

The Funpark Campaign consists of a few fun missions playing as either GDI or Nod. They were released to celebrate the release of Jurassic Park. If you are using the Origin launcher you won’t be able to access the Funpark missions. Instead use the C&C Ultimate Collection launchers here. Use the new desktop icon to run C&C and the Funpark campaign will be included in the ‘New Missions’ section.

The Covert Operations includes new units such as the Apache helicopter for Nod, Chem-Troopers and the SSM Launcher. If you’re using the Ultimate Collection Launcher you’ll also get access to the Jurassic mode Funpark Campaign where you can fight against and play as the dinosaurs.