You begin the level in an abandoned train. Step out of the train and head towards the two guys by the fire. Speak with one of them for a short dialogue. The man will suggest visitin the Cafe Metro.

Walk back to the train and jump up the side so you can pull up to the train roof. Crouch under the pipe and pick up the Large Health Pack on the other side. Lara will say that she can climb up the fencing on the wall.

Jump over to grab the fencing on the wall, climb up and get off on the platform to the right. Take a running jump to grab the platform across the gap. Walk one or two steps away from the edge and take a standing jump onto the small ledge by the wall. Save the game before you try this as it doesn’t always work. If you miss and Lara falls to the ground try again from a slightly different position.

Once Lara’s on the edge walk carefully along it through the gap in the fence. On the other side you’ll find a Chocolate Bar and some money, 160 Euro. 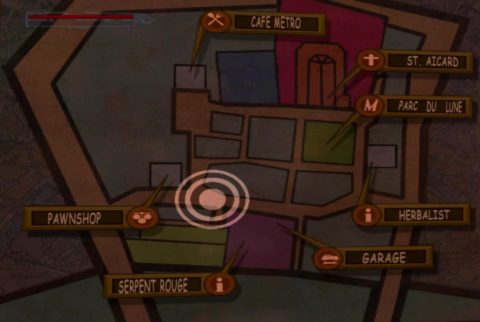 There’s a few places to visit in the Parisian Ghetto. First speak with Janice, the lady smoking by the side of the road. She mentions two of Bouchard’s ex-employees that you should speak to. A janitor named Bernard who you can find in a park and the ex-barman Pierre who now runs the Cafe Metro. You can’t speak to either of these two unless you’ve already spoken to Janice.

Across the street from Janice to the right is a Map so you can get an overview of the area. It also shows you your current location. To the right, under cover, is 160 Euro. If you head up the steps next to the Map and look to the left you’ll see a small park with benches. By the benches you’ll spot another 160 Euro on the ground.

Before meeting either of the two ex-employees there are a few other things you can do in this area such as visiting the church, herbalist or pawnshop.

The church is located on the northern side of the area. It’s no longer a church but a gym. You can enter the church and speak with the trainer to wage a bet between the two boxers. You’ll need to put up 200 Euro for the trainer’s Gold Watch. If you win you can sell the watch later at the pawnshop.

At the back of the church you’ll notice a stone carved block. Push it towards the wall to the left to receive a Lower Body Strength Upgrade. 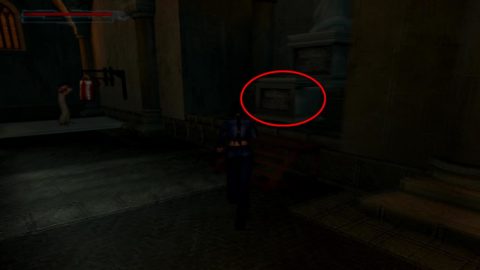 Climb on top of the block and then jump up to grab the ledge above. Turn to the left and you’ll see ledges along the side of the church both on the left and right side. You can traverse across to them or jump across but jumping across is quite risky. Either way make your way across one side and then the other for all the pick ups. On the right side you’ll find a Small Medipak and on the left side M-V9 Clips and Vector Clips.

Once you have them drop down and climb back up to the ledge above the stone block. This time climb up the climbable wall and hop across to the rafters. Walk straight along the rafters to the other side of the church, taking a small jump across the gap. Jump down to the wooden structure and climb down. Inside you’ll find a Diamond Ring. Climb back up and return to the church floor the same way you came.

The Herbalist can be found up some steps on the eastern side of the map. Speaking with him will give you a little bit of information on how to reach Bouchard through his doorman but it isn’t essential.

The pawnshop is located just to the west of Janice. If you go in you can speak with the merchant and sell him any valuable items you may have picked up along the way. He only buys things that aren’t important to your main mission so don’t worry about selling anything that you might need later.

The two ex-employees will agree to set up a meeting with Bouchard as long as you do a little job for them, retrieving a trinket from the Serpent Rouge. Both of them want the same trinket so as soon as you talk to one of them the quest with the other one will be closed. Pierre can be found in the Cafe Metro and Bernard is found in the Parc de Lune, across from St. Aicard’s Church.

Enter the Cafe Metro and speak with the bartender, Pierre. In your dialogue with him tell him that you’re the kind of person that sorts out problems. He’ll ask you to retrieve something for him from the Serpent Rouge. After the conversation you’ll have the Bartender’s Key in your inventory.

Make your way back to Janice and continue along the street to the east. As you do Kurt Trent will come racing out of the garage on a motorbike. Continue down the street and go down the next alley to the right. Open the Stage Entrance door with the Bartender’s Key to go to the next level.

Bernard can be found in the Parc de Lune across from the church. You can only speak with him if you haven’t accepted the job from Pierre. Talk to Bernard and agree to find the trinket for him. You’ll also need to pay him 160 Euro. After the conversation the Ex-Janitor’s Key will be in you inventory.

Head down the hill to the south to where the truck blocks the road. Head into the Cours la Seine and you’ll find the Nightclub’s Garage entrance on the left. Enter and continue in the next level.