If you accepted Bernard’s mission enter the garage on the Cours la Seine in the Parisian Ghetto. Search the counter and cabinets for a Socket Spanner, Desert Ranger Clip, Impactor Batteries, Bandages and an Antique Flintlock. Use the Switch to lift the platform with the jeep, revealing a trapdoor underneath. Don’t drop through it yet. Using the Lever on the other side of the room will give Lara an Upper Body Strength Upgrade.

Go up the stairs and break open the office door. Inside you’ll find the Desert Ranger and a Desert Ranger Clip. Walk back downstairs and drop through the trapdoor. Climb down and pick up the Chocolate Bar and M-V9 Ammo. Head down the hallway and climb up the ladder.

Near the liquor boxes you’ll find some Vintage Cognac on the floor. Use the Socket Spanner on the Switch on the wall to repair it. Use the Switch to call the dumbwaiter. This alerts a Security Guard who’ll come downstairs and unlock the door. Kill him (he drops M-V9 Ammo), or hide from him and then go through the door he just unlocked to the Dance Floor. Skip down to “Dance Floor”.

If you accept Pierre’s quest you’ll enter the Serpent Rouge through the rear entrance. A short cut-scene will give you a brief outline of the area. There’s a Security Guard in his office. If you pull the Switch the lights will turn off and the Security Guard will come out to investigate. You can either kill him with firepower or wait until he walks past the entrance to the small room and sneak around behind him to knock him out. Either way he drops M-V9 Ammo.

Dance Floor (Both Bernard and Pierre)

When you enter the dance room there will be two Security Guards (One if you killed the guard in the rear entrance). Both of them drop M-V9 Ammo. If you came through the stage door go through the door next to it. The left door of the two doors to the left of the stage. Go down the stairs and open the next door to the storeroom. Pick up the Vintage Cognac by the boxes and then go down the ladder. Climb up onto the crate for a Chocolate Bar and M-V9 Ammo. Go back the way you came to the dance floor.

Go behind the bar and use the Switch to call the dumbwaiter. Inside you’ll find 2 x V-Packer Shells. From the bar you can find 2 Chocolate Bars and Cognac. Head to the other side of the room and pick up the Health Pills from the ground on the right side of the DJ booth. Walk up to the booth and pick up the Antique Record from the turntable.

Pull the Switch behind the booth to start the music and light show. This will alert 2 Security Guards. The second guard comes from the ticket office at the back of the room. If you shoot him while he’s in the doorway the door will remain open. If the door closes don’t worry about it as the items in the office aren’t necessary. The two guards will drop M-V9 Ammo and if you get into the ticket office you’ll find 160 Euro and the Ticket Office Key.

Head up the stairs. Before you reach the top another Security Guard will come out of the door ahead. He drops M-V9 Ammo. Run around to the opposite side of the walkway and push the speaker out to the balcony. Climb on top and then jump up to grab the scaffolding above.

Walk slowly along the scaffolding because the scaffolding on the other side will collapse as you get close. Take a running jump across to the walkway on the other side. One Security Guard attacks from the right and other runs in from the left. Take them both out, pick up their M-V9 Ammo and then pick up the Large Health Pack from the floor. At the end of the walkway where the first guard came out you’ll find Bandages.

Walk to the gap in the railing where the lighting rig is moving up and down. When its at its lowest point take a standing jump to land on it. Take another standing jump to cross over to the other side. Turn left, climb up the scaffolding in the corner, traverse around to the right and pull up to the top of the rig.

Take a standing jump diagonally across to the other side, wait for the rig to be at it’s highest point and take a standing jump over the railing to the platform next to the ladder. Climb up the ladder and get off to the left. Slide backwards down the ramp to the left and grab on as you slide off the edge. Traverse around to the right and pull up above the barrels. Pick up the Desert Eagle Clips and crawl to the left. Push forwards while crawling to flip down through the gap to the floor below.

Jump back to the lighting rig and climb back to the top as you did before. This time stay on the side closest to the lighting booth. Face the booth and stand a close to the left side of the rige. When the rig is at it’s highest take a side flip over the fencing to the right. Position is shown below. 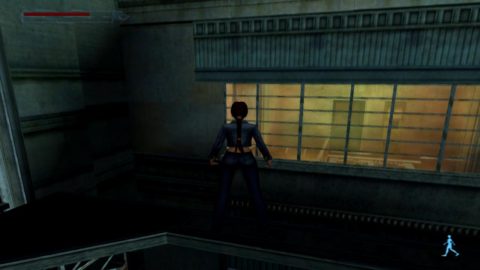 Turn around and use Action to kick down the drawbridge. Lara will gain a Lower Body Strength Upgrade. Now you’re strong enough to kick open the door to the lighting booth. Pick up the Ticket Office Key from the floor and take a look at the lighting controls.

The trinket is in the darker colored lights. To get to it use the left controls twice and the right controls once. Leave the lighting booth and run across the bridge. Climb up the ladder and then open the box to retrieve the Trinket.

Climb back down the ladder and enter the lighting booth again. Keep your gun drawn to take out the Security Guard who entered while you were gone. He drops M-V9 Ammo. Exit through the door at the back of the booth which leads back to the Parisian Ghetto.

Climb down the ladder, safety drop off the edge with the break in the railing, walk down the steps and drop through the gap in the wall to the alley below.