The Hall of Seasons I

When you stand on a button three doors will open. Two of them, when you pull the Lever inside, will open a trapdoor that sends you down to the basement. The third will open the door leading to the chamber. The correct doorway is the one that has the same symbol over the Lever as the Button you stood on to open the doors.

After stepping on the Water Symbol Button go through the left door and pull the Lever. Head through the door into Neptune’s Hall. When you enter the first room a Fire Knight will start hurling fireballs at you. You can dodge them or lure him close to the pit and knock him over the edge with one of your weapons to get rid of him permanently. 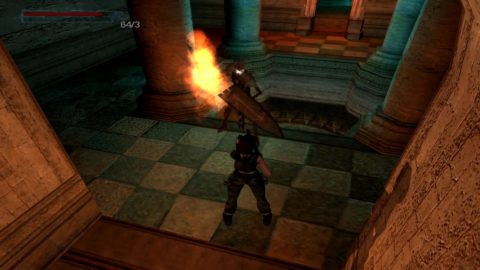 Search the corners of the room for 2 Boxes of V-Packer Shells. Enter the next room and drop into the water. Swim down as far as you can and then forwards into a small room. Pull the Lever to raise the water level and then swim back out the way you came. Swim all the way up to the hole you jumped into and then head back out to the room with the fire knight.

Now that the water level has been raised you can drop down the large hole without dying. Swim up to take a breath. Dive down and look for the small patch of seaweed on the floor. Just to the left of it is a small entrance. 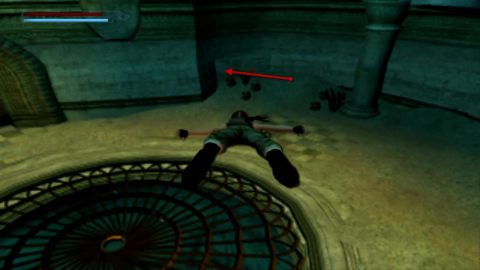 Swim inside and pull the Lever to raise the water level once more. Swim up to take a breath. Now that the water has been raised three doors are accessible. The right door has a Vector Clip and the central door a Large Health Pack. Finally go through the left door and drop down the opening to a water filled tunnel.

Save your game because the next section can be a little tricky. Swim through the bars and continue forwards through the tunnel. Spikes will jab out from all sides. Try to avoid them or heal up if you get low on health. Swim through another two sets of broken bars, turn right at the t-junction and pull up for a breath.

Wrath of the Beast (Earth Symbol)

After pressing the Earth Symbol Button enter through the middle door and turn right for a Vector Clip. Pull the Lever and go through to the Wrath of the Beast chamber.

Walk forwards and take a standing jump to the next ledge further along. A part of the ledge will collapse. Turn right and run along the bridge, jumping over the gap to the other side.

Walk along the thin rock ledge on the right side. Lara will turn sideways so you can sidestep across. Walk onto the rock to the left which will slide down towards the left side. When it gets close to the left ledge jump across to it. Side flip to the right before this ledge collapses. Turn to the right and take a running jump to the ledge in the far left corner.

These ledges will also collapse so jump and climb up the next series of ledges until you’re back at the regular floor height. Turn to the right and run across the rock bridge, staying to the right side as the left side collapses first. 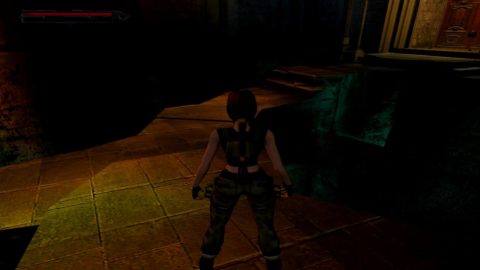 Take a running jump to the end before the whole bridge collapses. Pick up 2 Boxes of V-Packer Shells and the Earth Crystal. The floor will be rebuilt. When you step onto it 3 Fire Knights will spawn. You need to pull the 2 Levers, one on either side of the chamber while avoiding the fireballs from the knights.

If you do get set on fire there are streams of water on opposite ends of the chamber where you can cool off. The knights can’t be killed although you can knock them into the abyss in the center of the chamber. Once you’ve pulled the two levers head back through the gate to the main room.

The Sanctuary of Flame

Stand on the Fire Symbol Button to open the three doors to the Sanctuary of Flame. Go through the right door and pull the Lever to enter the chamber.

When you enter the chamber lava flows down the floor and the whole place begins to explode. Wait for the explosions to die down and walk down the stones, keeping to the left. Some of the stone pads will fall away when you stand on them so you’ll need to land on the stables pads to make it to the other side. 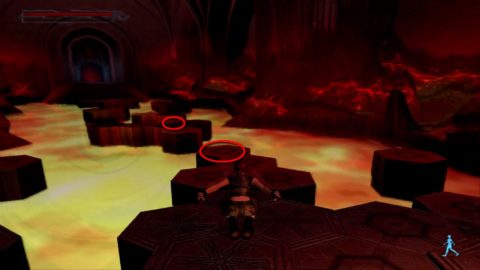 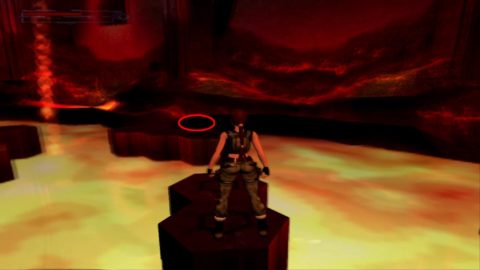 To get back stand at the back of the alcove and take a running jump back to the steps. Now you can run up and grab the Fire Crystal. 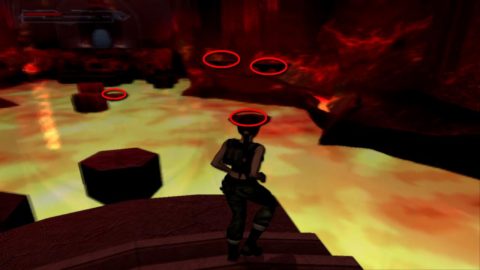 Walk across the pads that appear in front of you. Take a standing jump to the pad on the right that begins to sink and quickly take another standing jump straight ahead towards the entrance. Take one more standing jump over the last bit of lava and run back through the gate to the main room.

The Breath of Hades

Stand on the Air Symbol Button and go through the right door. Pull the Lever to open the door into The Breath of Hades chamber. When you enter the chamber walk to the right and push the movable wall to reveal a secret chamber. Go inside for 2 Vector Clips and pull the Lever to lift up the logs for Lara to jump across.

The logs will sway as the dragon statues breath on them, making the jumps more difficult than they need to be. Stand a few steps back from the edge and jump to the first log on the right. 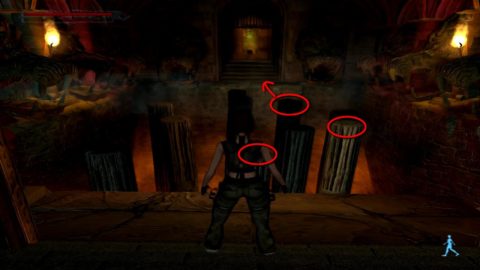 Take a standing jump over a log to the one behind it on the right, then over the next to the one in the far right corner. From here you should be able to jump to grab the ledge on the other side. Pull up and grab the Air Crystal.

Turn back to face out over the chasm and walk to the left side. Turn to the right and jump to the first log closest to the edge. Jump again to the log on the right side. the dragon statue head will withdraw. 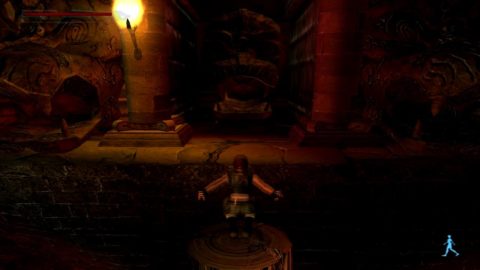 Jump into the alcove for a Large Health Pack and 2 Boxes of V-Packer Shells. From here stand close to the edge and take a standing jump onto the log off to the right, the next log closest to the entrance and then a jump back to the entrance. 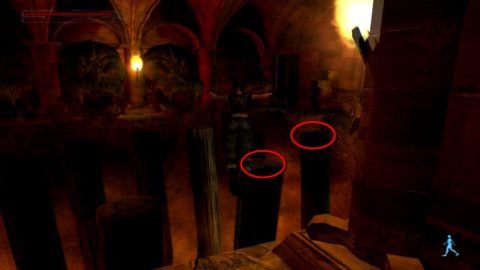 Go back through the doorway to the main chamber. Now that you have all of the crystals go back to the entrance and place the crystals in the slots underneath the four paintings. This opens up a door in the Basement.