After the short cut-scene run towards the gate at the end of the hall and go through. For a pickup, turn right, get as close to the pool as you can and jump up to grab the pipes on the wall to the right. Traverse across and drop down on the other side. Kurtis should have just enough strength to make it across. Pick up the Boran Clip and then traverse back across the pool.

Open the gate to the right of the office and go through the next double doors. Run to the right and approach the door at the end on the left. Kurtis will use his far sight ability to see the number of a prisoner in the cell, 17068.

Head back the way you came and go back through the double doors to the left. Head towards the office with glass walls at the end of the hall and open the door to the right of the office. Go inside and use the control panel. Type in the number of the prisoner 17068 to open his cell door.

Go back to the door you just opened and go inside. Pick up the Sanitarium Low Access Pass from the dead guard and a Chocolate Bar from the table. While you’re in here a Zombie will come in from the hall.

Leave the cell and go around the hall to the left. Use the card reader to open the large black door. Go straight ahead and enter the room on the right just before the white doors. On the bed you’ll find a Boran Clip. Leave the room and take the path leading down to the left.

Open the doors and go immediately to the right. Open the doors to the left and the creature, the Proto-Nephilim will run out. Don’t bother going in, just head back the way you came. By now the 2 Zombies have probably found you. They may approach from either direction.

Go back to the entrance and turn right. Follow the hall to the end and duck down to crawl under the gap in the wall. You can stand up on the other side. Follow the passage around and then go down the stairs that spiral around. Follow the passage at the bottom. Head around to the left and open the metal door at the end to a large open area. 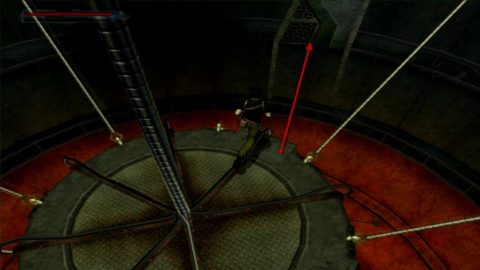 Pick up the Sanitarium Medium Access Pass from one of the dead guards and the Chocolate Bar near the lockers. Press the Button on the wall to open the door back to a previous area and go through. Follow the hall to the left and use the card reader to open the large block door.

When you run down the stairs Kurtis will come face to face with the Proto-Nephilim. This creature is fairly easy to beat. Once you shoot it enough times it will collapse and then run off to recover a little. This gives you time to pick up the Large Health Pack and Boran Clips if you need them. Once the Proto-Nephilim has collapsed a few times approach the creature and Kurtis will kill it with his Periapt Shard.

Pull the large Switch at the end of the room to end the level. In the next level you’ll be back with Lara.