The Vault of Trophies

Swim through the flooded tunnel, avoiding the spikes as you go. Take the first right and follow the tunnel around to the next intersection where you can pull up for a breath. Dive down again, swim straight ahead and then down through the hole in the wall to the left.

At the next intersection follow the tunnel to the right and then take the next right. Keep swimming until you can pull up to take a breath. Climb out to pick up the Bandages and an Aqua-Lung and dive back down.

This time swim forwards at the next intersection and use Action when you’re close to the stone wall at the end. Lara will smash it open. Inside is a large underwater dome with statues. Swim towards the large stone book on a pedestal for a clue. “The brothers reunited see the gates thrown open.”

The “brothers” are Vasiley and Limoux. Behind each statue is a plaque with their names. Find the two brothers, swim to the room behind each of them and pull the Chain to move them forwards. Use the Aqua-Lung that you picked up earlier if you’re running out of breath.

When the two brothers meet in the middle the part of the ceiling above them will collapse. Swim up through it for a cut-scene of Lara climbing out of the water and getting out of her wetsuit.

Turn away from the pool and run through the red cave. Walk when you hear a thudding noise. Wait for the stone to thump the ground and quickly run underneath it. Pull the Lever at the end of the passage on the left side to raise up some platforms.

You can get across in 3 jumps. Take a standing jump a few steps away from the edge to the platform in the second row, third from the left. From here take a standing jump to the rock ledge and then a running jump over the small lip to the exit on the other side. 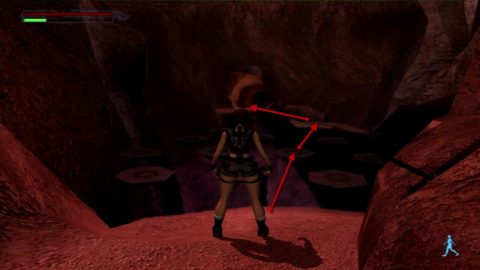 Run through the tunnel to a large library. You’ll be attacked by 2 Undead Knights. Once you knock them down twice you’ll kill them.

Pull the Lever to the right of the fireplace and Lara will get an Upper-Body Strength Upgrade and a secret compartment will open. Pick up the Health Pills from the secret compartment and then run to the opposite corner of the room. Pull the Chain to lift up the tapestry and reveal a climbable wall.

Climb the wall up and to the right until you can pull up onto a wooden ledge. Turn around, jump up to grab the grating above you and monkey swing until you can drop onto the grating below. Turn to face the center of the room, jump up to grab the grating and monkey swing across to land on the chandelier. When you land on it another compartment opens with the Fifth Obscura Painting. It also extinguishes the fire in the fireplace.

Drop down, pick up the painting and then crawl into the fireplace. Open the doors ahead and then drop into the pool of water. Swim along the tunnel and at the t-junction swim to the right. Follow the passage around and take a right at the next intersection. Swim forwards and pull up to take a breath. You’ll finally meet Ekhardt. After the cut-scene Kurtis will be left to deal with a terrible beast.