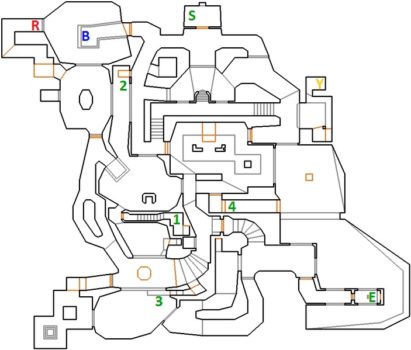 When you open the door to the south you’ll be met by a horde of angry enemies. There’s a red door to the right which you’ll open later. For now go to the left for the Yellow Key. Hug the left wall and make your way to the lift in the corner. Watch out for enemies sniping you through the windows or around corners.

Take the lift up and follow the ledge around to the Yellow Key. When you drop back down the yellow door will be just in front of you. There’s another yellow door on the other side. They both lead to the same room.

The yellow door room has a central structure with a lift going up. Enemies roam around up the top and can shoot you through a gap in the wall. Clear the bottom area and then take the lift to clear the top area. Come back down and follow the passage to the south. Notice the blue door on the left. You’ll come back here later.

Follow the stairs down to a bridge with a pillar in the center. Take out all the enemies and get ready to use the pillar for some jumps. The first jump is not a secret but it does give you access to the full map. Stand just behind the pillar and face to the northeast. You’ll notice a ledge just across the slime. 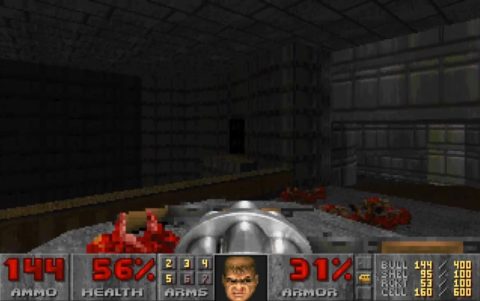 Ride the pillar up and dash across to land on the ledge. You’ll find an alcove with a Computer Map here. When you enter the alcove a ledge will lift up letting you get back to the bridge.

Use the pillar again and this time jump off the same side into the slime and pick up the Radiation Suit. Turn around and press the Switch to open Secret 1. Climb up the steps and pull the Switch at the end. This reveals a Chainsaw in the room to the west.

Head back down to the slime, check the pillar in the room to the north for Blue Armor and follow the passage to the north for a Soul Sphere and Secret 2. Open the door and make your way back around to the bridge.

Use the pillar and drop into the slime pool on the southern side. There’s a ledge right by the bridge with a Chaingun. The wall opens on the eastern side for Secret 3 and a Backpack. The wall will open letting you back out to the bridge.

Go through the large door on the western side of the bridge. Go up the lift and clear out the room. If you pulled the switch at Secret 2 than the Chainsaw will be available. Head back down to the bridge and take the passage to the north.

Open the door to the north and take the lift in the northwest. Follow the passage around to the Red Key. Head all the way back to the start and go through the red door. The walkway out onto the slime pool has the Blue Key.

Head back through the yellow door. Each time you find a key a new alcove opens with more enemies. The last one also has a secret. Find the alcove around the corner from the blue door and open the wall to the east. This is Secret 4 and reveals a passage out to the courtyard. you’ll find Invisibility out here as well as many Shotgun Guys.

Head back to the rectangular room and go through the door you just opened. Enemies will pour out if you haven’t killed them already from the courtyard. Make your way to the exit and hit the Switch to complete the level.