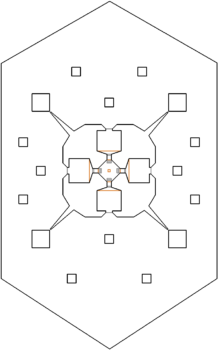 This is the final level of the episode and contains just 20 Lost Souls and a Cyberdemon. The Cyberdemon is a towering beast with a missile launcher for an arm. It has 4000 hit points and is one of the fastest creatures in the game.

Begin by picking up the Combat Armor and then hitting the four switches. This raises up steps to each of the four exits. Each room beyond contains ammo, mostly rockets, and maybe a Soul Sphere or gun.

Don’t worry about using rockets against the Lost Souls. There’s lots of space out here and plenty of rocket ammo. Although you may prefer to use the Chaingun or Plasma Gun to clear out the Lost Souls.

The Cyberdemon will make a path towards you while firing rockets in groups of three. Straffe to avoid the rockets or circle around the Cyberdemon while firing back. I prefer to use the Plasma Gun but the Rocket Launcher works just as well. Just make sure you stay out of range of the splash damage from the Cyberdemon’s rockets.

Once the Cyberdemon dies the level and episode will be completed. Enjoy the final cutscene and get ready for Inferno!