E4M8: Unto the Cruel

Unto the Cruel Walkthrough 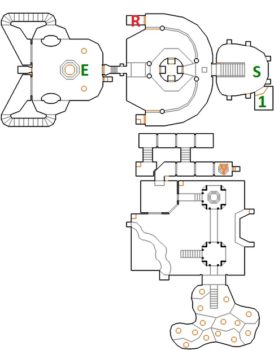 Kill the two Imps and press on the corpse to the left to open up a wall for Secret 1. This is the only official secret for this level. Head down the stairs and press the Button to open the large door. On the other side are many Shotgun Guys and Zombiemen. You can clear most of them out with a few shots of the BFG.

Open the door at the end of the walkway to the north to find the Red Key. The pillar in the center has four small rooms around it. You need the red and yellow key to open two of them. All of them have a Baron of Hell and the two that require keys have Buttons that open the path to the final boss fight.

For now open the door to the south and step onto the teleporter to be taken to the southern portion of the level. Quickly clear out the enemies and head up the stairs. Take out the Baron of Hell to the left and then go down the stairs to the left. Press on the pillars to lower them and grab all the loot. By the end of it you should have full, or close to full, ammo and full health.

Go back up the steps and across to where you killed the Baron of Hell. Follow the walkway to the left and take the lift down. Grab the Yellow Key and open the wall behind it for an unofficial secret. The teleporter takes you to a ledge to the south where you can find some extra loot. Go back through the teleporter, continue around the corridors to another teleporter that takes you back to the northern area of the level.

Use the keys to open the rooms in the central pillar and press the Buttons. Head across the bridge to the west and open the door to the final area.

Once again you’ll be facing a Spider Demon. There’s also a few Barons of Hell, Lost Souls, Cacodemons and other smaller enemies. Clear out the area with BFGs and use the BFG on the Spider Demon or finish her off with rockets. Behind the Spider Demon is an secret alcove behind one of the walls where you can find a BFG. Although it’s very difficult to get to it while the Spider Demon is still alive.

Once you’ve killed the Spider Demon the pillar in the center of the courtyard will lower, revealing the level exit. Congratulations on completing The Ultimate Doom! Stayed tuned for Doom 2 and Final Doom.