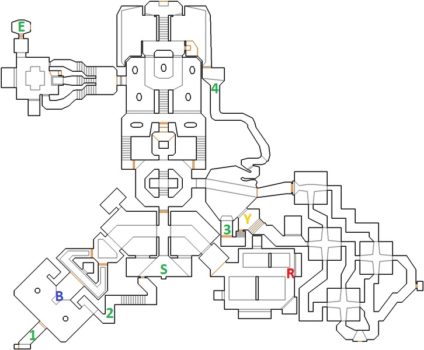 On Ultra-Violence and Nightmare skill levels this map has more enemies than any other map in the four episodes. It’s fairly complicated but not as difficult as the next mission.

Just ahead of the starting position is an intersection with walkways across slime pools. Take out the enemies to the east and west. Make your way to the east. This is where you’ll find the Red Key.

When you enter the room beyond the walkway the walls behind you will close shot and will remain shut for 30 seconds. When you move forwards to pick up the Red Key the walls around the edges will open and you’ll be attacked from all sides by Imps. Clear them out and head back west along the walkway.

The two Red Doors both lead to the same area, a walkway with a Blue Key overlooking a slime pool. Once you have the key jump into the slime and open the secret door opposite for Secret 1. Ride up the lift for a Soul Sphere. Come back down and get on the ledge on the eastern side of the pool for Secret 2. On the ledge you’ll find Blue Armor and up the stairs you’ll find a Blur Artifact and a Light Amplification Visor. The switch on the wall opens a door back to the start.

Go through the door to the north and head to the walkway to the east with the blue door at the end. A trap opens to the south with Demons. From here you can either go through the Blue Door which leads to a maze or open the secret door on the south wall of the alcove with the Radiation Suit. Don’t pick up the suit for now. You’ll need it later. Open the southern wall of the alcove. This is Secret 3 and contains a Blur Artifact, Rocket Launcher and Backpack.

Go up the stairs and open another secret wall to the room with the Yellow Key. If you take the path through the maze you’ll need to flip the Switch to the south of the maze to open up access to the yellow key room.

Go back to the walkway and pick up the Radiation Suit in the alcove. Cross the pool of slime and follow the slime passage to the north, which eventually leads to a door. This is Secret 4. Drop down to the courtyard below and take out the Shotgun Guys. The pillar with the Soul Sphere drops down when you get near it.

Ride the pillar to the top and open the door back into the main building. You’re now behind the yellow doors. Clear out the enemies and walk up the stairs in the very north. Pull the Switch up the top to open the door to the east which leads to the exit.

Clear out the many enemies and turn around when you see the switch. Walk backwards towards the switch and watch as the walls open up releasing more enemies. Use a rocket or two to thin them down. Once the coast is clear pull the switch to open the door to the north. Kill the remaining Specters and hit the final switch for the Exit.