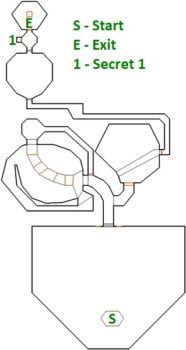 Hell Keep is a short map and doesn’t have too many enemies. Begin by pressing the switch in front of you to take a lift up to a large courtyard. There are 3 Imps here and 2 Cacodemons waiting behind the door to the north. If you line them up you may be able to temp them to fight each other.

At the intersection continue straight ahead and quickly run over the bridge, picking up a Shotgun along the way. The bridge will collapse as you run over it. At the other end you’ll need to kill 3 Imps. Head back to the corridor and go through the door to a smaller courtyard.

Once again try to get the Cacodemon and Imps to fight each other. Kill whoever remains and then go through the door to the east. This thin corridor has 5 Demons. If you’ve been careful with your ammo you should have enough shotgun shells to deal with them.

Continue to the north to a small room with grey walls. The west wall open to reveal Secret 1, a small alcove with a Rocket Launcher and shotgun shells. Open the door to the north for the exit.