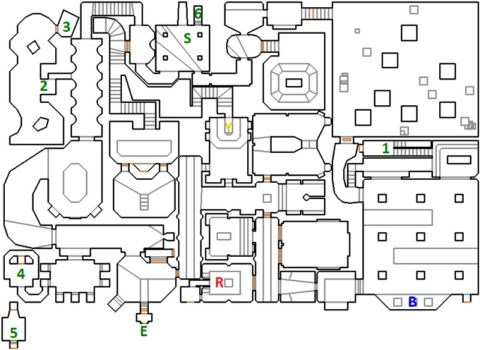 The Spawning Vats is the penultimate level for the second episode but really isn’t that difficult. From the starting area you’ll immediately be attacked by 2 Demons. There’s a secret in the wall to the north but you’ll need to flip two switches before accessing it. There are two exits from this room, one to the east and the other to the west. Take the path that leads east first.

When you’re on the stairs down to the cargo area in the northeast a door will lock shut behind you for 30 seconds. The easiest way to get through this area is to stay on the stairs and clear out a few of the pink Demons. When you think you can make it make a dash for the Invincibility on a box in the southeast corner. There’s a Beserk pack near hear as well. Punch or shoot the Demons and then hit the switch to open the passage to the south.

The courtyard to the south has a couple of Cacodemons and a Baron of Hell. The switch in the southeast alcove opens a room to the west and the Blue Key is on the ground to the south.

On the way back make sure you go up the stairs leading to Secret 1. Take out the Imps and go down the next stairs. Pull the switch to open the secret.

Head back to the starting room and this time take the exit to the west. Before going through the blue door follow the passage around to a long corridor with a Baron at the end of it. Take him out and then go through the small passage to the west to a dark room which is Secret 2. To the north of this room is another door that leads to Secret 3. Make your way out and go back to the blue door.

Explore this area and first look for the switch in a room to the south. It opens the first door for Secret 6. You’ll need to flip two switches to get inside. Find the Yellow Key on a walkway overlooking a room with Imps. Drop down and explore the southern area. There’s lots of Imps here. Don’t be shy to use all of your ammo because this is the last main level for the episode. The Red Key can be found by hitting switch in the room to the south.

Before going to the exit make your way to the room in the southwest corner. There’s a small passage leading out of one of the alcoves. This is Secret 4. There’s a Plasma Gun behind the teleporter and the teleporter leads to Secret 5. Hit the switch to reveal the final secret back in the starting room. Go through the teleporter to get back and go back to the start.

An alcove, Secret 6, next to the starting door should be open now. Inside you’ll find a Soul Sphere. Head down to the south and open the red door. Open the switch door and use the switch behind it to lift up a bridge to the exit. When you do a Cacodemon will also be released. Take it down and head through the exit.