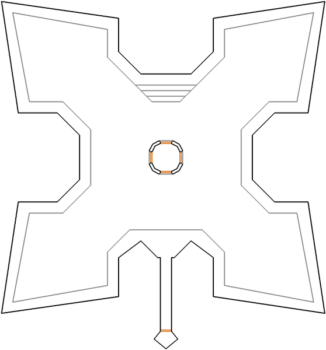 Dis is the final level for Inferno and features a new boss called the Spiderdemon. She’s not as tough as the Cyberdemon, with 3000 health instead of 4000, but she has a supercharged Chaingun that can tear you apart in seconds if you’re not careful.

From the start of the level open the door to the north and make your way around the ledges, picking up as much ammo as you can before the Spiderdemon finds you.

Once you’ve been spotted drop down to the ground level and hide behind the central structure. You can open the doors for the Blue Armor inside but all of the doors will open, making you easier to spot.

There are a few Cacodemons and a Baron of Hell wandering about as well. You may be able to lure them to attack the Spiderdemon. While she’s distracted with other enemies she won’t attack you until they’re dead.

If you’ve saved some energy cells for this boss fight use the BFG to quickly kill the Spiderdemon. She should go down after 2 or 3 direct hits with the BFG.