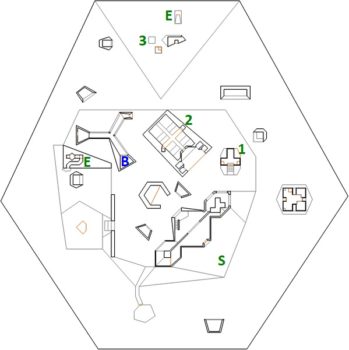 From the  Start take out the Shotgun Guy and then enter the building. There’s quite a few enemies here on multiple levels, including a Barron of Hell. Clear out the building and then climb the stairs to enter the small building building to the north, shaped like a cross. When you drop in you’ll be attacked by 2 Specters. Take them out and then go through the teleporters. They’ll take you to the ledges on the corner of the building. The one on the right takes you to Secret 1 with a Plasma Gun.

The other buildings to explore are a rectangular building with Imps in cells out the front, a horseshoe shaped section, steps to the west dropping down onto a platform and a Y-shaped building.

When you get close to the rectangular building with Imps in cells a trap will open to the north releasing Cacodemons. Inside the building open the wall to the east with candles for Secret 2 and an Energy Cell Pack. Open the wall to the west for a teleporter. Go through it to arrive on a ledge near Secret 3 and the Secret Exit. Run over to the pillar with the Chainsaw for Secret 3. Drop into the box nearby to be teleported into the Y-shaped building.

This building is filled with Imps and Shotgun Guys. Outside a few Cocodemons will be released. Make your way down the corridor and pick up the Blue Key. Down the other corridor is a button that opens the exit from this building.

Enter the horseshoe shaped building. When you do traps will open to the east and west. One is filled with Lost Souls, the other with Imps. Inside one of the traps is an Invincibility. Leave it until you’re ready to head for the secret exit.

When you are done exploring this map pick up the Invincibility and then enter the rectangular building. Go through the teleporter and carefully make your way around the ledge until your directly in line with the button down below. Turn around to face the wall and shoot a rocket into the wall. You’ll be propelled into the box with the secret exit. Hit the button to complete the level.