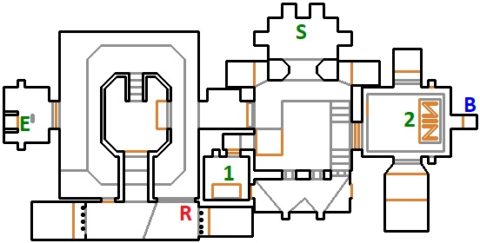 Hell Beneath is one of the most difficult levels not only for this episode but for the entire Doom series. On Ultra Violence difficulty there are no medikits, only one green armor and a few health potions. With very little ammo you’ll have to deal with numerous Shotgun Guys, Imps, Specters and  five Barons of Hell!

When you step forward to pick up the Shotgun Shotgun Guys will spawn in from the walkways to the left and right. Head across to the undercover area to the south and kill the Imps. There’s  armor bonuses here but you may want to save them till after you’ve picked up the green armor. Push the Button on the far wall to open a door to the west.

Two Specters will run out so deal with them and then the Shotgun Guys on the ledge. Pick up the Green Armor but go back for the first secret. At the end of the walkway you’ll find an ammo clip. Stand close to the edge and press “Space” to lower the ledge. Run forwards for a Rocket Launcher and Rockets. Open the wall to the left for Secret 1. Inside are two teleporters. They each take you to one of the ledges in the corners of this area where you can pick up Shotgun Shells.

Walk to the open area to the west with the building in the middle of a pool. Don’t pick up the health bonuses to the south or you’ll spawn in a Baron of Hell. Instead kill the Specter running around in the slime below and drop down to go into the building.

Take out the Imps hiding in the corners and then run forwards to pick up the Chain Gun. Move a little further forwards and then back again. Enemies will spawn in, including a Baron of Hell. The Baron and a few others will hopefully get teleported out again. You can deal with them later. For now run forwards and pick up the Red Key to the left. The Baron and other enemies should be behind the gate by the red key. Take out the smaller enemies but leave the Baron.

Make a dash for the red door to the east. Kill the Imps and pick up the Blue Key. Quickly dash out of the room but activate the torch to the north. This lowers the central wall. Quickly run past the Baron and enter the center building in the slime again. Head to the gate and wait for all the enemies to make there way towards you. You may need to fire your weapon to trigger the other 4 Barons of Hell.

When they’re all grouped together use your Rocket Launcher to do as much damage as posssible. Finish off any remaining enemies and go back to the room with the blue key. Walk over the NIN symbol on the floor and the walls will rise up. This is Secret 2. Walk back over the symbol to lower the walls. Head over to the blue door and step into the teleporter to end the level.