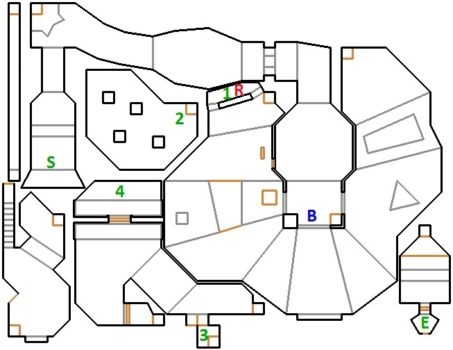 This is the first map in The Shores of Hell. Unlike the first episode there aren’t abundant resources so you’ll need to conserve your ammo starting from this level onwards. This level is small but it’s broken up into 7 sections separated by teleporters.

When you begin move forwards, ignore the teleporter in the corner for now and follow the passage around to the right. Take out the enemies and pick up the Blue Key at the end of this section. Head back to the teleporter you missed and go through it.

The second section has a lot of enemies but if you’re quick you can glide past many of them to pick up the Shotgun. Clear out the area and continue around to a button on the wall. Hit the Button and a panel will rise up with buttons on either side. The button on the east side opens the wall to the north where you can find the Red Key. This is Secret 1. The button on the west side lowers the teleporter pad in the corner. Don’t go through it yet. Instead backtrack to the teleporter at the beginning of this section and take it to the first section.

Head back to where you picked up the blue key. There’s now a teleporter in the corner. Go through it for Secret 2 where you’ll to be taken to a dark room. The safest option is to backtrack out through the teleporter and let the enemies come to you. You’ll face your first Cacodemon here. The dark room contains a Plasma Gun.

Lower the ledge and take out the Demons, Shotgun Guys and Imps. Open the Red Door across the blood for Secret 4 with a Computer Map and Blue Armor. Head back across and open the blue door. Go through the teleporter to the next section.

Kill the enemies and hit the switch to raise the stairs to another switch. The Cacodemon at the top will be alerted. Hit the next switch to lower the teleporter pad. Go through to the final section.

It’s not over yet. You’ll be attacked by a Cacodemon in close quarters. Carefully dodge it’s fireballs and take it out. Then open the door to the level exit.