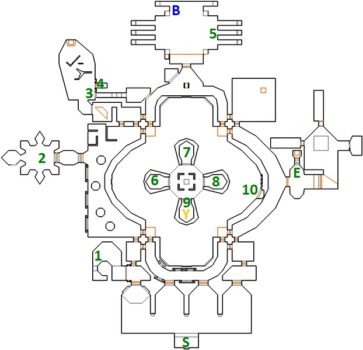 From the start you’ll have four doors in front of you. Take the one on the left lit up with the red torches. Open the wall to the left and follow the room around for Secret 1 and a Light Amplification Visor. Come back out, open the door to the north and then go north again.

Open the wooden door to the left and go through into the next room. Kill the Demons and pick up the Soul Sphere and Plasma Gun for Secret 2. Press the skull button to open the exit and come back out. Kill the 3 Cacodemons hiding around the walls to the north.

The two doors to the north take you to the same room and the door to the east leads to the central area. Take one of the doors to the north first. Kill the Demon and open the door to the east. Look north and open the secret wall just past where the wall curves on the left. This is Secret 3. Dash across the slime and up the stairs for a rocket and box of bullets. Ignore the room through the window and come back down to the hallway.

Continue to the north and pass through the small structure with the red walls. When you do the silver door will open. Take out the Specters and run to the northwest. Lost Souls will be released and the crushers will activate.

When you exit the room get ready to fight a Baron of Hell from a room that opens up to the right. Go back into the room and go behind the last crusher, to the left, to a teleporter which teleports you to a square room to the northeast of the map. Use a BFG to take out the Demons and pick up the Beserk pack.

Secret 6, 7 and 8 are opened by going through the doors in the northeast, southeast and southwest corners and standing on the teleporters. Each time you’ll be teleported to the center of the courtyard and one of the doors will open, releasing a Baron of Hell or Cacodemons. When you’ve dealt with them go through the teleporter to the northwest to be taken back to the room that was filled with Demons.

With the Yellow Key you can open the secret alcove on the eastern side of the courtyard. This is Secret 10. Inside you’ll find a Chainsaw and Soul Sphere.

When you are done exploring this map go through the Blue Door to the east. The Exit is to the north. The room to the east is a trap. When you enter a wall will close behind you, locking you in until you hit the skull button in the small room to the east. If you fire your weapon dozens of enemies will spawn into the room. If you want to clear out this area avoid the Imp and hit the skull button. Make your way back out and fire at the Imp. You’ll be in a much better position to deal with the many enemies as they spawn in.