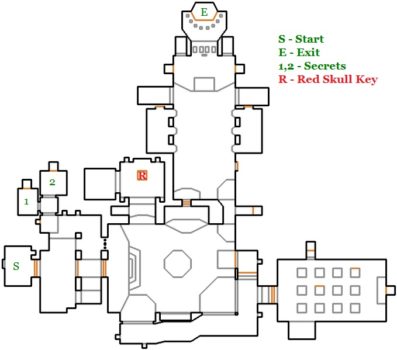 Unruly Evil is the easiest level for episode 4. It probably should have been the first mission and is a walk in the park compared to the previous levels. Open the door and kill the Specters and Imps. Ride the lift up and follow the corridor around to the left. Press the torch in the wall to lower a lift. Inside you’ll find Secret 1 and Secret 2. When the lift lowers you have access to the first secret with a Beserk pack. If you’re fast enough you can quickly walk back onto the lift as it lifts up. Otherwise you’ll need to go through the teleporter to the central courtyard and come back to this lift. Stay on the lift to be taken up to the second secret with a Rocket Launcher.

The central courtyard is clear except for Imps wandering around the side corridors. Shoot them from here and then drop down to pick up the loot. When you get around to the lift with the health bonuses a door will open to the north of the courtyard. This contains the Red Key. When you pick up the Red Key Imps will be released from the room to the west and a few Demons will be released elsewhere in the courtyard.

The room to the east is optional. After killing the Cacodemons and Specters run across the lava to the Soul Sphere. You can get on top of the pillars by using the lift on the northern edge of the north-east pillar. Hop across the pillars to the ledge with the medipacks if you need them.

Go back to the courtyard and open the door to the north. Take out the Shotgun Guys on the ledges to the left and right. Press the Button and take the lift up to the northern ledge. The exit is just ahead but is blocked by two gates. Go through the teleporter to the left or right and hit the Button on the ledge. Imps and Cacodemons will be released.

Head up the lift again and go through the other teleporter. Hit the Button and more enemies will be released. Finish them off and then ride the lift up once more and walk forwards to the exit.