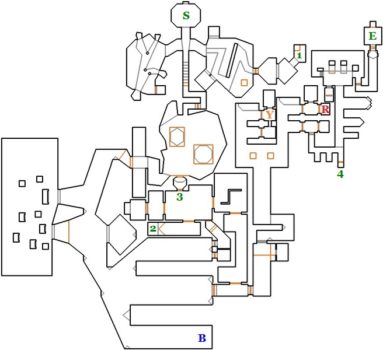 From the starting room take out the pink Demon and then clear out the room to the right. There’s a wall that opens up to the southeast of the room with a Shotgun although this doesn’t count as a secret.

Next clear out the room to the left of the starting area. Use a couple of rockets to kill the Cacodemons hiding behind the windows on either side. Take out the Demons and then go through the teleporter. This counts as Secret 1. From here you can shoot at the Demons that form part of a trap. Go back through the teleporter, head through the door and grab the items. When you do the trap will open. If you’ve already killed the Demons you’ll have nothing to worry about.

Head back to the starting area and go up the stairs. Follow the corridor around to a courtyard filled with enemies, including a Cacodemon. Use the BFG to clear the courtyard or just shoot at them from a distance with your shotgun.

Dodge through the two crushers so as not to activate them and pull the three switches on the other side. Two of them lift up the floor under the crushers so you can get the items, the third opens the path forward.

Pick up the Invincibility from under one of the crushers and move forwards to the next rectangular room. Take out all the Imps and Demons while your invincible and continue forwards around the path to the east.

When you go to pick up the medipak by the second window on the right a trap will open to the east and Demons will rush out. Use a couple of rockets to take them out quickly.

Down to the south there are three corridors. The first leads to a couple of rooms, one with a Cacodemon and the other with loot. The third corridor has the Blue Key guarded by a Baron of Hell and Lost Souls. The central corridor has the blue door and the path forward.

Take the door to the left first for a couple of secrets. Make your way around to a room with three exits. The door on the left leads to a corridor with a v-shaped wall. This is Secret 2 and contains boxes of rockets. The door to the north has a Lost Soul with a switch and small lift. Drop down the lift for a BFG. Hit the switch and the lift will rise up again so you can get out.

Open the red door and clear out a the smaller enemies. Run back to the western side and pick up the Invincibility. Head back and open the wall to the south where the Lost Soul was hiding for Secret 4 with a Radiation Suit.

Continue to the north, take out the final Demons and head around to the exit. kill the Cacodemon hiding in the exit room and go through the teleporter to leave the level.