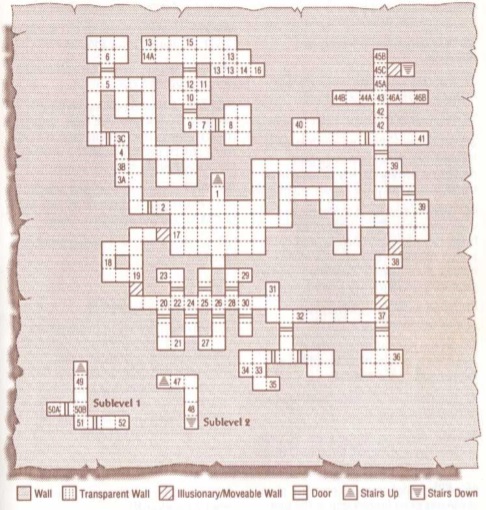 The second level of the Catcomb is filled with Skeletal Warriors. Often they’ll be accompanied by 8th level Temple Clerics. The Skeletal Warriors are fairly resistant to spells. Use Turn Undead on them to cause them to run away and try to pick them off one at a time.

The second Horn can be found on this level, as well as Calandra, a decent fighter who will join your party when you rescue her, and Shorn Diergar, a dwarf cleric, who has a chance to offer to join your party.

2) Use a Grey Key in the keyhole on the north wall to open the door to the west.

3A-C) Fireball trap. Pull the Lever to trigger a fireball from 3C. Step backwards to avoid the fireball. When the fireball hits the wall a Skull Key appears in the niche at 3B.

4) Use a Skull Key to open the door to the north.

5) When you step here the door to the north opens and four Skeleton Warriors from #6 step forwards.

7) When you stand here the door to the east opens, releasing three Skeleton Warriors and a Temple Priest from #8.

9) Use a Skull Key in the keyhole in the west wall to open the door to the north.

12) This door must be forced open.

14A) Two Skeleton Warriors and two Temple Priests. A Scroll of Neutralize Poison is on the floor.

15) There’s a pile of items in this room designed to lure you in so you get trapped by the Skeleton Warriors. There’s an Axe +2 called “Bait”, a Short Sword +2 called “Sting”, a Helmet, Boots, two Iron Rations and two Cleric Scrolls of Cure Serious Wounds.

17) The Secret Button opens a passage to the west.

18) Potion of Vitality and Potion of Cure Poison.

19) The south wall is an illusion.

27) Shorn Diergar, the dwarven cleric is imprisoned here. If you release him there is a small chance he will offer to join your party.

29) The remains of a drow mage, San-Raal. He has Intelligence 18 and makes a good addition to your party if you’re looking for another Mage.

32) Use the Skull Key on the lock to open the door to the south.

35) Calandra the female warrior is here. Free her and she’ll join your party. She’s a level 9 Fighter with 18/36 strength.

37) Push the Secret Button on the north wall to open up a secret passage.

38) The northern wall is an illusion.

39) Use a Darkmoon Key to open the door to the north.

40) The niche on the western wall has a Horn named “East Wind” as well as a page from Wently Kelso’s Journal. The niche in the north wall has two Potions of Healing and a Potion of Speed.

43) The remains of a letter from Wently to Dran are on the floor.

44A-B) Stepping on the Pressure Plate at 44A triggers a fireball from 44B which flies towards your party.

45A-C) Stepping on the Pressure Plate at 45A triggers a fireball from 45B. The wall to the east of 45C is fragile and can be bashed down. Behind the wall are the stairs to Catacomb Level 3 Location 1.

50A-B) Falling down the pit on Catacomb Level 1 Location 20B will bring you to this cell. To get out throw a small item through the cell door and it will hit a Button on the opposite wall (50B) causing the door to open.

51) The door to the west has a lock but there’s no key able to open it. Use a thief to pick the lock.

52) Mage Scroll of Lightning Bolt and a Skull.