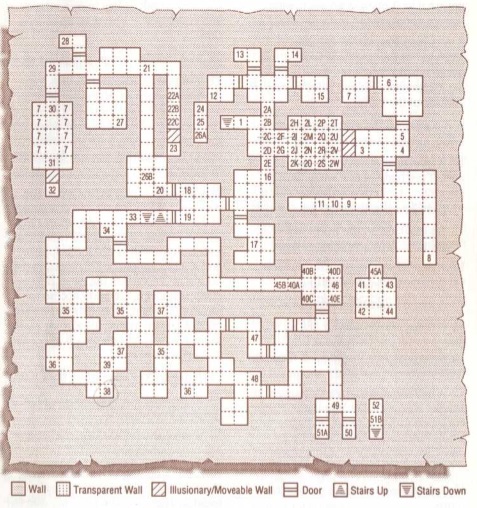 1) Stairs down to Temple Level 1 Location 14. The first time you enter this level you’ll be greeted by a Spirit.

2A-W) This room is filled with light pads. Your entire party will take heavy damage when trying to pass through them. Some of the pads will blink on and off, giving you a chance to run through them. The optimal path to the eastern side of the room is 2C, 2F, 2I, 2J, 2K, 2O, 2S, 2R and 2V. Once you get to 2R the eastern walls will disappear. The light at 2J never really blinks off so you’ll always take damage when trying to pass through it.

3) Four Mantis Warriors block your path. Kill them quickly so you can move off the light pads. One of them drops a Bone Key.

4) This Lever turns on/off the light pads. It’s currently set to on.

5) use a Bone Key to open the door to the north.

6) Push the Button to open the door to the west.

7) Mantis Egg. If you hack it open a Mantis Warrior will breaak out and attack.

9) The plaque on the wall reads “What can be trusted?”

10) The triangular niche in the north wall is magical. If you put a small item in the niche it will transform into a Wand of Lightning with two charges.

11) The plaque on the north wall reads “Nothing ventured, nothing gained.”

12) A Mantis Warrior guards the room and a Polearm +1 can be found on the floor.

14) A Mantis Warrior lies injured on the floor. If you have compassion and heal it it will attack you. Once killed it drops a Mantis Key.

15) Tanglor, the helf-elven fighter/cleric is resting here. If you let him join your party he’ll come equipped with a Dagger, Holy Symbol and Plate Mail. On the floor is a Short Sword +1 and a Shield +1.

17) Place three Bones in the mouth to be given a Bone Key.

21) Two Mantis Warriors. One of them has a Sphere of Fire and casts it at the party.

22A-C) There is a Button on the east wall at 22A but don’t touch it yet. First throw an item at the Button on the south wall at 22C. This removes the wall and opens a pit at 22B. Now press the Button at 22A to close the pit, giving you access to 23.

27) A Mantis Warrior guards a Mage Scroll of Blur and Dispel Magic.

29) Use a Mantis Key to open the door to the south.

31) If you reach this location before breaking the eggs they will all hatch and release Mantis Warriors. There are two Green Gems set in the south wall. Take out the left gem and put it back again. The south wall will disappear, giving you access to 32.

32) A Copper Key, Mantis Idol and Sphere of Fire.

38) A Copper Key, Potion of Cure Poison and a Femur.

39) There’s a Giant Wasp nest on the west wall. It can’t be destroyed. Occasionally Giant Wasps can be seen coming from the nest.

49) The Spirit that greeted you at the start of this level returns.

50) The Spirit tells you that entering this teleporter continues the test. It’s lying. The teleporter takes you back to Location 33.

52) This teleporter transports you to 51A.