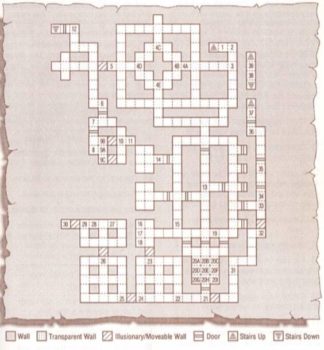 Make sure you rest and have your spells ready before going down to level 3 because you won’t be able to rest beyond this point. Once you go down the door will close behind you, preventing you from returning to level 2.

On level 3 you’ll face Gelatinous Cubes and Margoyles. If Gelatinous Cubes get close they can devour your armor so keep away from them if possible. Margoyle’s are immune to normal weapons so make sure you have magic weapons at the ready before facing them.

2) The writing on the wall to the east reads “There is no turning back. All who enter are doomed.”

3) When you walk over the small trip stone the door behind you will close, locking you on this level.

4A-E) Push the Button on the wll at 4A to turn off the spin corridors. If the Button is not pressed each time you reach a corridor you’ll be spun counter-clockwise to the next one.

5) The west wall is an illusion.

6) A Gelatinous Cube. Underneath it is a Potion of Healing, Spider Key and a Skull. The Button on the east wall opens the door to the south.

7) Putting weight on the Pressure Plate opens the door to the south.

9A-C) Long Sword -2 called “Hath Kull”, a Shield +1 and Bracers of Protection +5. When you pick up one of these items the door closes and the walls at 9B and 9C disappear, releasing five Margoyles from #10.

11) Pushing the Button on the east wall opens the door that closed when you picked up an item at #9.

12) Use a Spider Key to open the door to the west. The stairs lead down to Catacomb Level 4 Location 1.

15) Use a Spider Key to open the door to the west.

17) A Portal is on the west wall and can be activated with a Stone Dagger or Stone Gem. It takes you to Temple Level 2 Location 36.

19) Use a Spider Key to open the door to the west.

21) Push the Secret Button to open the passage to the east.

23) Press the Secret Button to open the passage to the north.

26) The north wall is an illusion.

27) The niche in the north wall has a number of items including a Potion of Extra-Healing, Darkmoon Key, two Arrows +1 and a Sphere of Fire. The sphere can by used to cast a fireball. It has a single use only.

28) The niche in the north wall contains a Spider Key, Stone Gem Portal Key and a Sphere of Fire.

29) Press the Secret Button to open the wall to the west.

32) The Secret Button opens the passage to the north.

33) Three Margoyles. One of them drops a Grey Key when killed.

34) Use a Darkmoon Key to open the door to the north.

35) Use a Darkmoon Key to open the door to the north.

36) Use a Spider Key to open the door to the north.

37) You can find the Horn “South Wind” in the niche and the stairs lead up to Catacomb Level 3 Location 38.

39) Stairs up to Catacomb Level 2 Sublevel 2 Location 48. Use a Grey Key on the east wall to open a niche with Mage Scrolls of Detect Magic, Shocking Grasp and Fireball and a Cleric Scroll of Raise Dead.