The Ruins of Desarune are located to the west of Sleet Island and contain clues that will help you open the gates of the Cemetery. Inside you’ll find numerous secrets guarded by a variety of monsters including Giant Crabs, Ice Guardians, Slimes, and Undead Archers and Soldiers. In the tunnels below you’ll find the Archives and Lexiconary. 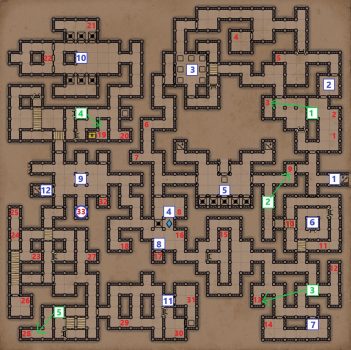 2: Round Key and Scroll of Fireball.

3: Skyway Puzzle. Drop items on the pressure plates from the level above and a sky bridge will appear. Keep placing items as you make your way across the room. Use the Round Key on the keyhole on the other side so you can continue.

4: Crystal of Life. Access the south is blocked by the pit.

5: Follow the Light. Head down one of the stairs to the Archives below. You’ll notice a Spider in a cage. Press the Button on the west wall to open an alcove. Inside you’ll find a Note that says “Follow the Light”.

Stand on the Pressure Plate to teleport the Spider to the level above and take the stairs back up to the Ruins of Desarune. The Spider will be walking back and forth as it goes through a teleporter. When you stand on the pressure plate the spider will fall down to the level below. You want the spider to fall down into the center pit in the Archives below.

From the Ruins of Desarune drop items down the pits that correspond to the pressure plates that were lit up. This will open the door to the east so you can continue on your way.

6: Meditation Spire. Rest here to be teleported to a similar looking structure in the Archives and leads to a secret.

7: There are 2 Giant Crabs behind these gates but you may want to open them to fight them as they are guarding a Tome of Earth.

8: Use a Gold Key to open this door. Behind it you’ll find an Ax. A Lever on the wall to the north closes the pit, giving you a shortcut back to the first half of this level.

9: You’ll need to find both Iron Keys so you can pull the Levers and open the gate leading to the stairs down to the main part of the Archives.

When you pull the Levers a wall will open revealing a Power Gem (Item 33). Unfortunately groups of Skeleton Soldiers will also be released.

10: Pull the Lever to release the Skeleton Soldiers and open the gate to the Iron Key. Defeat the Skeletons, grab the key and return to the hallway to the south. Drop down one of the pits to fall down into a water-filled room of the Archives below.

11: Press the Button on the north wall and then stand 1 tile east and 2 tiles south. Throw an item onto the pressure plate to the east. This opens the gate to the second Iron Key.

12: Stairs down to the Archives.

1: Press the Button on the wall to reveal a bridge heading to the platform over to the west. Quickly run across for the secret with a Potion of Resurrection.

2: Press the Button to open a wall hiding a Leg Plate. Taking the Leg Plate open the gate back to the start.

3: Press the Button to open a passage to the west. You only have a few seconds to get there. Inside you’ll find a Serpent Bracer and Tribal Spear.

4: From this raised position throw an item to the east. It will land on a pressure plate and make a bridge to the secret ledge with a Rage Potion and Zarchton Harpoon.

5: Press the Button to make a bridge above you. Go across it for the final secret where you’ll find a Tome of Earth and Lock Picks.