The Twigroot Forest is a wooded area north of Shipwreck Beach. It’s inhabited by Twigroots which like to hide in dead branches. Keep an eye out for clues to the two buried chests. First you’ll want to explore the Twigroot Tunnels underneath the forest, then head east to the Forgotten River. 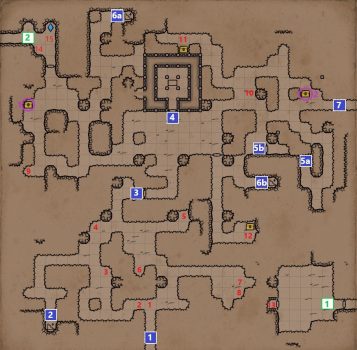 2: Stairs to Twigroot Tunnels. You’ll need to find the Round Key in the tunnels to open the gate at 3.

3: Open the gate with the Round Key found in the Twigroot Tunnels.

4: Entrance to the Shrine of Fire. When you have 4 Power Gems you can place them on the altar to form the Essence of Fire.

5: Pull the lever at 5a to open the gate at 5b. Behind the gate you’ll find the first Power Gem.

6: Stairs down (6a) to another section of the Twigroot Tunnels. You’ll come back up from the exit at 6b.

1: Access to this secret is from the Forgotten River. Step on the stone circle and blow the horn of summoning to summon Golems. Defeat them and the gate to the west will open where you can pick up the Tome of Knowledge.

2: Exit the Crystal Mine Entrance to this hidden area for another secret where you’ll find a Crystal of Life and a bunch of loot.

1: A sign on the western side of the map reads “AR E. UHU KO. AR E. UHU E” The translation for this will be discovered later. It means “Left 1, Forward 3. Left 1. Forward 1”. Inside you’ll find a Gold Key, Steel Armband and a Shield Potion.

2: In the Twigroot Tunnels you’ll find a note that reads “I had more equipment than I could carry so I buried some of it right between the two lanterns in eastern Twigroot Forest.” Inside you’ll find the Tome of Leadership.