The Twigroot Basement consists of 5 separate areas that you can drop down into from the various pits in the Twigroot Tunnels above. Inside you’ll find Mummies, Ratlings and Wargs, as well as a couple of secrets. 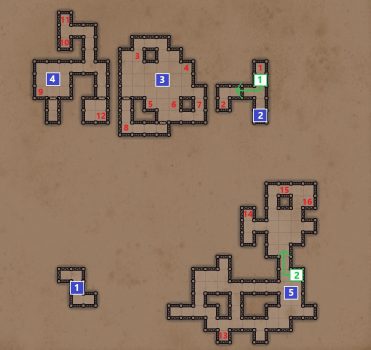 1: The small section to the southwest can be reached by dropping down the first section when you first enter the Twigroot Tunnels above. There’s nothing here but a Windgate that will teleport you back up.

2: When you enter the Twigroot Tunnels for the second time and get trapped in a chamber drop down a pit to enter the northeast section of the basement. You’ll find a Healing Potion to the north and a Button that opens a secret.

3: Drop down a pit in the nest area on the level above and you’ll land in the center north area. Watch out it’s filled with Wargs. To get back pull the lever behind the pillar to the north and it will open the gate to the Windgate.

4: Once you complete the Philosopher’s Stone puzzle on the level above and teleport to the northern room drop down a pit. You’ll land in then northwest section of the basement. Kill the Ratlings and search the area for Healing Potions.

5: When you face the Trickster on the level above drop down one of the pits to land in the southeastern section. Here we have the Shrine of the Glutton and various items scattered around the area, including a Tome of Health.

1: In the northeast chamber press the Button on the wall on the tile before the Healing Potion. This disables the Windgate and reveals a passage behind it with a Mummy, 3 Fire Bombs and 30 x Pellets.

2: Fall down to the Shrine of the Glutton in the southeast to reveal a secret. Place 3 pieces of Food in the alcove next to the sign on the north wall to reveal a hidden passage. Inside you’ll find a Tome of Health and a few other items.