After completing Eel Hunting Ms. Sertel at the Cordona Chronicle will offer you another case from Mycroft. He wants you to find a book with a red cover by F.D.

The book is in the hands of an agent named Angelo Dondolo. He was last seen leaving his bookshop in Old City at the eastern end of Ceto St and hasn’t been seen since. 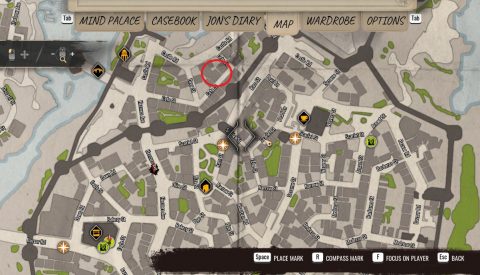 Follow the footprints around the path to the left. When the footprints end you’ll find a bookmark on the ground, along with a wooden club, a deep footprint and cigarette butts.

It appears Angelo was attacked. Open your casebook and pin “Tracking Angelo Dondolo” to your screen. Wear some regular workers clothes and speak to the other people in the yard. They’ll tell you that two men went down the stairs to Castle Rd in Old City. One man put the other in a cart and rode off.

Head out to Castle Rd and take a look at the ground by the stairs. You’ll see blood and tracks from a cart. 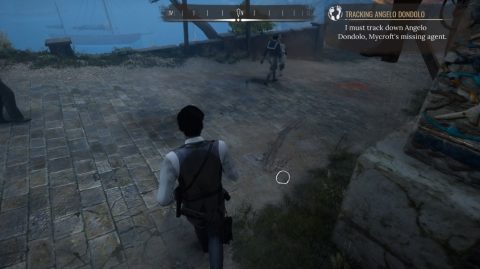 Follow the tracks east on Castle Rd up to the entrance to a bandit camp. Take a look in the cart to see a hat and bandages. Then open the door to the bandit hideout and take them all out.

After the battle check one of the side tables for Keys and a Map of Cordona with a red pin in Angelo’s bookshop. Search the other side table to find a Knife, Finger and Ring. Rotate the ring around until you can see the engraving inside.

With the keys you can now enter the prison cells. One of the cells has a mattress with blood stains. We’ll come back to this later.

The other larger cell contains a table with a letter, books on the floor (but not the one you’re looking for) and the body of Angelo. 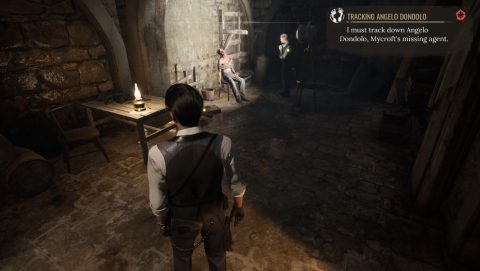 After finding all the clues pin “Bandit’s Lair” to your screen. Go back to the smaller cell and take a look at the mattress using concentration. This time you’ll see Angelo hiding the book under a brick. 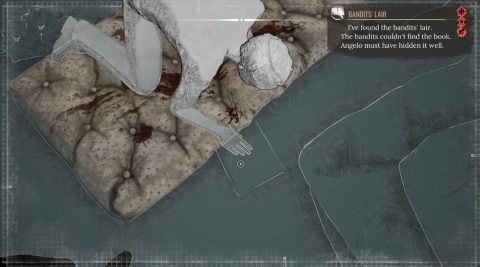 Investigate the brick and take the book underneath. That’s all we can do here so return to the Cordona Chronicle and talk to Mrs Sertel. You have the option of sharing with her the ring. This is bad news for her because the ring belongs to her fiancé. Either way the case will be closed and you’ll be rewarded with 20 credits.