String Theory is a side quest only available after completing A Gilded Cage. Eavesdrop on the two men in front of the Cordona Police Station. They’ll give you the clue to check out the violin poster at St. Clement’s Cathedral in Scaladio.

Make your way to the cathedral and have a look around for one of the posters. Read it and it will tell you where to go next. 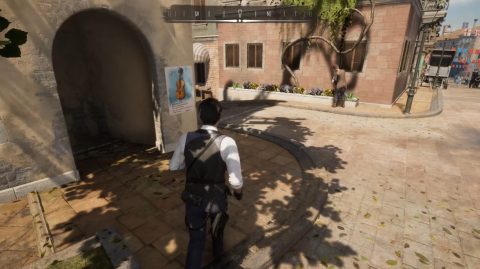 The note says to meet Anthony on Professor’s Rd, north of Adler St in Scaladio. Head to the location and speak to the man putting up the poster. 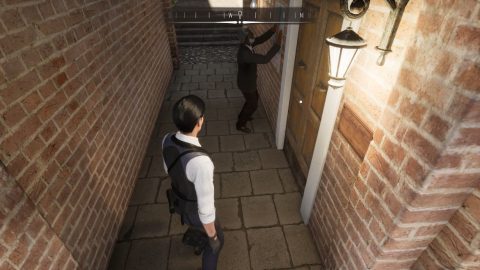 Offer to help and he’ll invite you into his house. Go inside and take a look around. Use concentration on the door to see that it was kicked in. Look at the broken glass display by the window. The violin is taken but the bow remains. Look at the white fabric, the lock, the broken bottle and the bloodstain.

You can also take a look at the music notes on the stand, the piano with a cover over it and the certificate on the shelf.

Once you’ve uncovered all the clues talk to the old man again and go through all the dialogue options. Open up the casebook and perform chemical analysis on the Scrap of Fabric.

Pin “Bloody Trail” to your screen and leave the house. Use concentration to follow the trail to a market square northeast of the cathedral. They’ve left a mess so someone must have seen something. Talk to the child by the baskets of corn cobs. 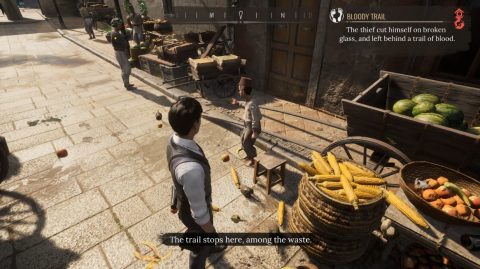 The child tells you the sailors had a violin and also stole his donkey. When he asks tell him “It’s not your fault”.

Pin “Stolen Donkey” to your screen and change clothes to a workers apron or something similar. Talk to the other merchants and they’ll tell you they went towards the fountain by the arch.

Head west to the arch and use concentration to spot the hoof tracks. Follow them west to the donkey. Keep going to find a cap, bananas and finally the Wet Whiskers bar where you’ll find the donkey.

Eavesdrop on the two men having a conversation. Look for the words “Bunch of Sailors”, “Wrecking the Tavern” and “Patrons Frightened”. 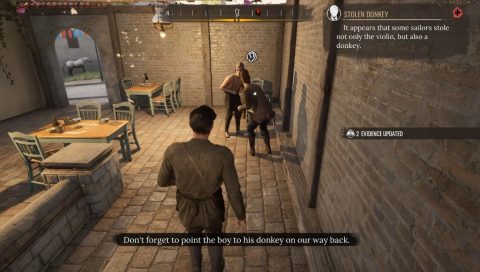 Go through the door to the outside bar area and fight the sailors. Defeat all the enemies by killing or arresting them and then pick up the violin from the bar stool.

Return to the child at the market and let him know that his donkey isn’t far away. Then head back to the music teach to return the violin.

As Anthony plays the violin take a look at the sheet music on the stand. 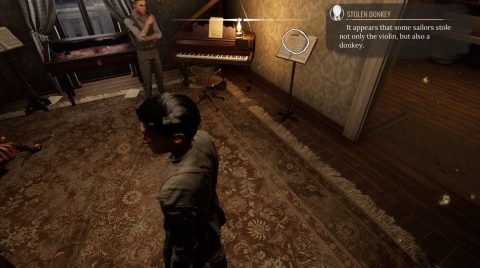 You’ll have a memory from your childhood and Jon will challenge you to tell Anthony the truth. Speak with the music teacher again and let him know you used to sneak into the attic and listen to him play.