This quest begins at the Drinking Dutchman fast travel point in Silverton when you eavesdrop on two sailors. It becomes available after completing A Gilded Cage. When listening to the two sailors look for the words “Work of a Siren”, “Police at the Place” and “Beach by the Cemetery”.

Pin “Tales of Sirens” to your screen and make your way to the beach to the south of the Cordona Cemetery. It’s at the Greek bridge between Grand Saray and Miner’s End. Once you arrive you’ll see a policeman by a sailor’s body.

Talk to the policeman about everything and then inspect the scene of the crime. Look at the drag marks between the water and the body and then the body itself. Look at the forehead, mouth, left hand and left boot. Next look at the wine bottle for two clues, the label and the neck of the bottle from above.

Open your casebook and do a chemical analysis on the “Wine Sample”. Sherlock will discover that the wine was laced with poison.

Take a look at the footprints around the crime scene and then pin “Crime Scene Footprints” to the screen. There are 3 sets of footprints in total. Track them in concentration mode to the end of the jetty where you’ll find a cigarette.

Once you’ve discovered all the clues talk to the policeman again and ask him about everything.

Head back to the police station and pin the evidence “Another Drowned Sailor”. Look for “Crimes – Violent”, “Subjects – Victims” and “Districts – Scaladio”. You’ll find a police report on another drowned sailor. 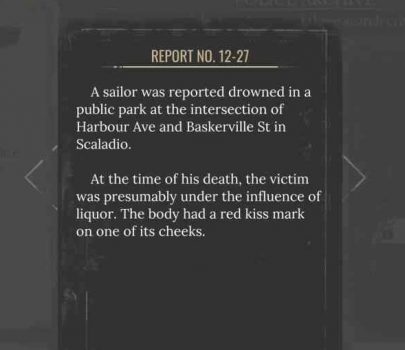 Pin “Report No. 12-27” to your screen and make your way to thye Public Park at the intersection of Harbour Ave and Baskerville St in Scaladio. Go to the center of the park to find the crime scene.

Pin “Park Crime Scene” to your screen and investigate all the clues. There are 4 markers here with a number of clues at each one. Once you’ve seen everything click on the sparkle to start the recreation.

From the order of the police markers this is the solution to the recreation.

After the recreation interact with the well for another 3 clues, matchbox, silver fork and cloth.

Pin the objective “Wet Matchbox” to your screen and go back to where the case began, at the Drinking Dutchman tavern. Wear an outfit that the sailors with be sympathetic towards such as a workers apron or sailor’s uniform and speak to the bartender.

Talk to the bartender about everything and during the conversation ask him “Three people are dead?” He’ll tell you about a third dead sailor at the Giant Sparrow Club on Queen St, near the intersection with Gloria Ln in Scaladio. 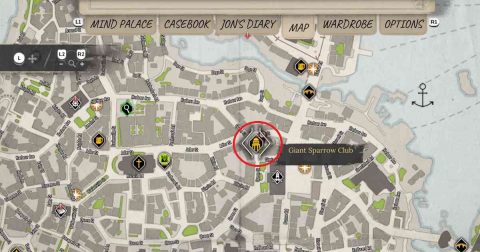 Make your way to the Giant Sparrow Club and talk to the police officer at the crime scene. Examine the corpse for 4 clues, wound on head, blood on rock, broken bottle and slip marks near feet.

After investigating you’ll conclude that this was a genuine accident. Talk to the police officer again to let him know and head back to the Drinking Dutchman.

Enter the tavern, go upstairs and enter the last room on the right. Search the room for clues, photograph and letter on the chair to the left, bottles on the table and sleeping sailor.

Pin the objective “Letter from Elisa” to your screen and talk to people about the location of the Garden of Delights brothel. It can be found on Grange St, west of Drinking Dutchman.

Talk to the woman standing outside and show her the cotton shawl. She’ll point you to Elisa who’s down the street.

Before meeting her you’ll need the right clothes. Wear the Marine Uniform, Sailor Cap and Shenandoah Beard. Then talk to Elisa. She’ll think you’re a former lover named Harry and take you to her place.

When she leaves you alone in the room take a look around to gather evidence. Look at the wine bottle on the table and then go through to her room. You’ll find a note on the table to the left and a diary, cigarettes, white poison bottle and red lipstick on the dresser to the left of her bed.

Once you’ve found all the clues Elisa will come back. You can either turn her in to the police or let her go. If you turn her in she’ll drink the poison and die. If you let her go she’ll give you a kiss and thank you. Either way the case will end.