Objectives: The Reaper, from the Thieves Guild has been hired to kill you. You must increase your Max Life to above 130 so that you can survive and assassination attempts.

Tips for the Gold Token: To receive the Gold Token at the end of the quest you’ll need to increase your Max Life to 170+. This sounds like a difficult task but there are a few cards that will make it much easier. From your supplies you can add the Health Tonic for +5 Max Life. Some encounter cards that may help are the Shrine, Alchemist, Soothsayer, Winter Solstice and Man-Eating Tree. Equipment cards for this quest are the Lion Heart, Ruby Ring and Imperial Armor, which gives +20 Max Life if you’re using a one-handed weapon. Add a card or two for blessings and other resources and you should be ready for this quest.

The Flailing Dragon Inn: As you begin the quest a street urchin will approach you and tell you that someone has put a mark on your head. Make your way through the first map to the Tavern for the Night. The Innkeeper will cast a healing spell which restores you to full health before you sleep for the night.

The second map is much the same. Explore the area and then head to the Tavern for the Night. You’ll have one more map to explore and by the end of this one you’ll need to have 170 Max Life if you want the Gold Token for this quest.

Once you are done head to The Reaping encounter for the final showdown. As you go to sleep for the night The Reaper will shoot a magical arrow that does 130 damage. The Innkeeper will heal you for 50 Health before you begin the battle with The Reaper. 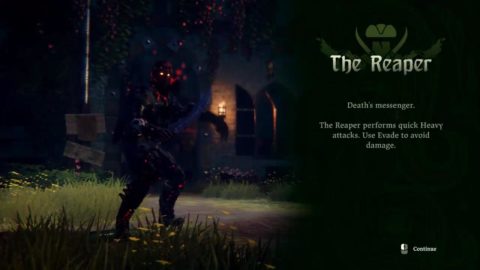 The Reaper is a tricky opponent to defeat. He has the ability to teleport behind you and quickly strike with an unblockable attack. When he teleports quickly roll out of the way. Luckily The Reaper doesn’t have any armor and he fights alone so a few big hits should put him away for good.