Objective: After battling with an Ogre you’re left dying and cursed. You’ve found half of Edesia’s Charm but must defeat the Ogre to claim the other half. Before confronting Draknar you must have at least 60 Defence to claim the Gold Token.

You and your companion suffered defeat at the hands of an Ogre and are now left gravely wounded. With only 10 Life you’ll want to stack your Deck with cards that will increase your Life such as Lion Heart (Equipment Card) and Healing Spirits (Supplies). Healing Spirits can be used on your first time giving you an extra +30 Health right away.

If you’re going for the Gold Token add plenty of Armor to your deck as well. The Armor pieces can be upgraded during the mission and you’ll be given a Shield if you don’t have one but it’s better if you can find a higher quality shield with good Defence. If you have Jousting Armor from a later mission bring it along as it gives 20 Defence and can be upgraded for another +10 Defence.

During your journey you’ll travel from town to town. At the first town you’ll meet Ariadne, the daughter of a travelling Blacksmith. She agrees to meet you in the next town where you can begin upgrading your equipment.

At each town you can upgrade one piece of Armor. You’ll have three chances to upgrade a helm, breastplate and shield. If you have no armor the Blacksmith will give you a shield that can be upgraded. Upgrading armor adds +10 Defence.

At the beginning of the last level you’ll come across the Shattered Forge. The Ogre has destroyed it but the Blacksmith is fine. He tells you that Ariadne has run off to deal with the Ogre by herself. Make your way to the Test of Strength encounter for the final battle. If you have at least 60 Defence Ariadne will help you with the fight, otherwise she’ll try to defend you and get knocked out. 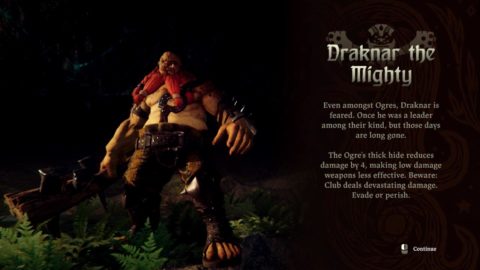 Draknar has thick hide which reduces damage from weapons by 4. He also has a big club with a long reach. Regardless of his size Draknar isn’t that difficult to defeat. Keep rolling out of the way of his larger attacks and then move in for a few of your own combos until he falls.