Objective: Gather enough Fame to wield the mighty Hretha’s Ire and then defeat the Shaman who leads the Northern Raiders.

This quest has two possible tokens, a gold and a silver. If you acquire 20 Fame on the way to defeating the Shaman you’ll win the gold token.  You begin with the encounter ‘Elder’s Gift’ where an Elder will give you the Hretha’s Ire. You can’t wield the hammer until you have 20 Fame. You can ask the Elder questions before starting off on your journey.

Once you arrive in the new area raiders will attack the village of Braedon in ‘A Village Burns’. After helping to defend the village from the Northerners you will gain 4 Fame. There are another 4 encounters to explore, hopefully you’ll have the 20 Fame before you’re finished with them and ‘The King’s Road’ will turn into ‘The Sanctum’ encounter. Use Hretha’s Ire to break through the magical barrier.

It’s here that you’ll meet a new companion, Colbjorn the Wanderer. He’ll help you in your battle against the Shaman leader. He has a rush ability that stuns opponents for a short while.

Raid Leader Gurda: This Shaman has a spell that heals her allies. She also has an area of effect attack and can teleport to safety. Once you defeat the Shaman the other raiders will run away so focus all your attacks on her. 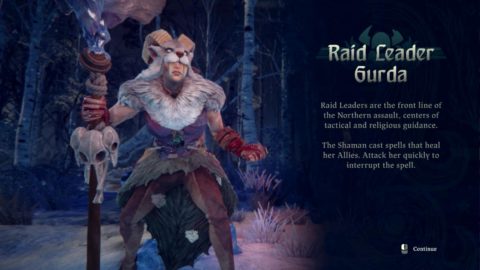 If you complete the quest and defeat the Shaman with 20 Fame then you’ll unlock new cards, including the Hretha’s Ire which you can use for future quests. Colbjorn will also be available as a companion choice from now on.