Objective: The plague is spreading through the Old City. Help Estrella rescue as many citizens as you can and lead them out of the city. You’ll need to rescue 60 citizens before escaping the city. To locate the city gates you’ll need to destroy a certain number of corrupted on each level.

This is another difficult quest and requires careful deck construction. You’ll need to make sure you have access to plenty of food as resources are scarce in the Old City. Armor such as Pious Robes will help prevent you from starving but you’ll also need additional food to help rescue some of the citizens.

For the first level you’ll need to defeat 12 Corrupted in combat before being able to clear the gatehouse. Rescue as many citizens as you can along the way. The encounters will be revealed as you wander the city streets. Once you reach the gatehouse the game will let you know if there are still citizens to be saved.

When you are read go to the Gatehouse and defeat the corrupted. From there you can move on to the next district to rescue more citizens. For this level you need to defeat 40 Corrupted before being able to clear the final gatehouse. If you want the Gold Token you’ll also need to rescue all 60 citizens. When you reach the Final Refuge be prepared for a big battle.

When you try to leave the Old City Captain Stirling confronts you and won’t let you leave with the civilians. You’ll have to fight your way past him and his guard. 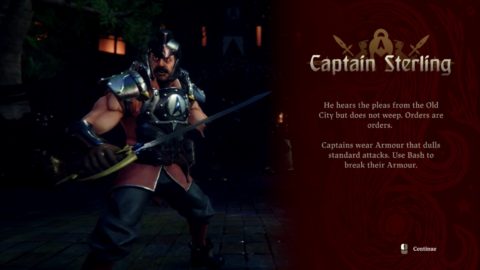 Captain Stirling wears armor that you’ll need to bash before being able to do direct damage. A heavy hammer or axe works well against him. He has close attacks and a pistol for ranged attacks. Once the Captain has been killed this quest will be complete. If you rescue all of the citizens in the Old City you’ll win the Gold Token and gain a few extra cards. From this point on Estrella will be available as one of your companions.