Objectives: All of your companions have been injured or kidnapped. You’ll need to find a way to rescue them without falling into the trap set for you by Lord Apollyon.

Special Rules: Lord Apollyon will help you complete the requirements for rescuing your friends but the gambits will get increasingly difficult to win.

Tips for the Gold Token: This quest is actually fairly easy until the last level where you need to return to Apollyon for the last time to make it across to Estrella. In order to get the Gold Token you need to rescue all of your companions as well as Theophilus who is the Traveler in the Grey Traveller encounters.

Apollyon will help you rescue your friends but in order to save Theophilus you’ll need to let him drink from the Mysterious Vial on the last level. This will make it impossible to win against Apollyon during the final gambit. You’ll need to find another way across to rescue Estrella. The easiest way to do this is with the Desert Trek card which is the final card in the Market Pickpocket series. The Desert Trek card will fill the map with Desert Crossing cards, allowing you to get across to the Imperial Fort where Estrella is being held. To ensure you get the Desert Trek card on the last level add the Forgotten Dreams card to your deck. This always spawns on the last level and you can use it to repeat any discarded encounters.

Saving Ariadne: For the first level you’ll need to receive 4 Blessings so that the High Priestess will see you and heal Ariadne. If you don’t have the Blessings go and see Apollyon and win the gambit against him for the 4 Blessings.

Saving Malaclypse: Somewhere throughout these levels you’ll meet the Grey Traveller who will give you a number of tasks. Go along with it as he’ll create the Mysterious Vial that you’ll need on the last level. Once you reach Rumstock where Malaclypse is being held the peasants won’t listen to you unless you have at least 40 Fame. If you haven’t got the Fame go back and visit Apollyon.

Saving Colbjorn: While you’re at an inn a hooded stranger enters and tells you that Colbjorn has been kidnapped by the Thieves Guild and they want 150 Gold for his release. If you don’t have 150 Gold by the time you reach the East Marketplace you’ll need to visit Apollyon and ask for his help yet again.

Saving Estrella: The Empire have taken Estrella for Treason. You can’t even reach her on the map because there’s a gap in the cards. If you’ve been completing the quests for the Grey Traveller he should have completed his Mysterious Vial. You can drink it yourself and this will give you a chance to win the final gambit against Apollyon but this will exclude you from winning the Gold Token. See the tips above for winning the Gold Token. Once you drink the potion you’ll receive the Eternal Hope blessing that will add a Huge Success card to card gambits.

Theophilus will turn against you and you’ll have a boss battle against him. Once he’s been defeated return to Apollyon and win the card gambit. He’ll teleport you over to Estrella but you’ll lose half your health in the process. Once you reach the Fort you’ll be ready for the final battle. 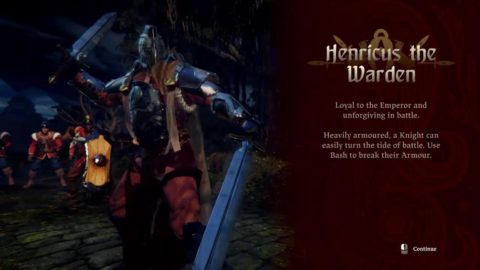 Henricus is heavily armoured and has a band of Empire Soldiers as a guard. He has a couple of unblockable attacks so be prepared to roll out of the way. Once he and his Empire guard have been defeated you’ll complete the quest.