Objectives: Gather 12 Conspirators and find a secret way into the Palace.

Special Rules: Some of the maps have gates leading to different districts. You’ll need to fight or sneak by the guards each time you try to pass.

This mission is fairly straightforward but finding all of the 12 conspirators for the Gold token is more challenging. There are exactly 12 conspirators so you’ll have to find them all. Make sure you bring cards that improve your chances of winning gambits. Especially the dice gambit because one of the conspirators requires you to roll at least an 18 on 3 dice. Also some of the citizens may fling curses at you if you fail to get away unnoticed with a dice roll.

The first map is split in two with Patrolling Soldiers in the center. If you want the Gold Token make sure you explore all of the first side before confronting the soldiers.

How to Get the Gold Token:

A Pageant Wagon – Go over to the travelling theater and agree to join the play as one of the actors. Try to put on a good performance to entertain the crowd (kiss the Hag, eat the cake, etc.) and make sure you “Denounce the Empire” as you final dialogue option. Herda the Aproned will pledge her service to your cause (1/12 Conspirators).

If you put on a good show and win the Wheel Gambit with some Gold coins then Old Patton will be so impressed that he’ll join your cause as well (2/12 Conspirators).

The Cemetery – You’ll meet a gravedigger called Tomas and an Old Woman, called Hild, in the cemetery. Agree to follow Hild to her husband’s grave. When she reaches the tomb “Follow her into the tomb”. It’s a bit of a maze inside. To follow her you need to go East, North and then West. Once you reach the inner sanctum place the flowers NEXT to the hole and Hild the Deceased will join you (3/12 Conspirators).

When you run back to Tomas “Search in the pointed direction”. You’ll come face to face with a hulking mass. To defeat it you can either fight it, call for help, or reason with it. Each of these options requires an 18+ on a Dice Gambit. You can also win by rolling triples of any number but this is probably even more difficult. When you come back to Tomas the Gravedigger he’ll join your cause (4/12 Conspirators).

When you take the Amber Bottles outside the townsfolk will be so happy that Jon the Blacksmith will join your cause (7/12 Conspirators) as well as Harriet the Widow (8/12 Conspirators).

The Corrupted Borough – When you meet the man at the wall agree to go into the corrupted borough. Explore the borough and win a Precision Gambit to find Feran the Silversmith who will join your cause (9/12 Conspirators).

Now head to the source of the groaning which is a mass of corrupted. Attack them and defeat them. The townsfolk will be astonished and among them you’ll find Lenna the Bal Maiden who will join your cause (10/12 Conspirators).

Explore the borough once more and you’ll find an old school. You can search it for supplies. When you leave you’ll come across Jannis the Twin who will pledge her services to you (11/12 Conspirators).

Finally leave the borough and “Sneak Lenna and Feran over the wall”. Fight the corrupted. If you attacked the corrupted earlier you’ll only have to face an Abomination here. Defeat it in under 2 minutes and you’ll all escape. Along the way you’ll meet Tolan the Weaver who will join you (12/12 Conspirators).

Once you’ve found all 12 Conspirators make your way to the Church of Fires for the final confrontation.

General Flinthallow and the Chained Ogre: 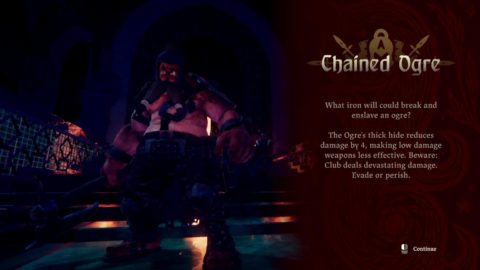 Not only will you face an Ogre but a General as well. I found it easiest to run away from the Ogre and kill everyone else first. The General will rain down arrows on you so be prepared to roll out of the area of effect.

When you’re left with the Ogre try to roll underneath his attacks to the sides. Some of his attacks are blockable but if you’re not comfortable with the timing just get out of the way. Once he and the General have been defeated the quest will be complete.