Run through the glass doors and down the steps towards the fountain in the middle of the greenhouse. Speak with the Scientist, Dr. Muller to learn about the Cabal. At the end of the conversation he’ll spray Lara with some kind of chemical and escape.

Step into the fountain and pull the Gargoyle that doesn’t have water flowing out of it to open up a secret passage. If you turn around to the face the entrance the secret passage will be just to the right of stairs.

Go through the secret passage and climb up the ladder. On the ledge above you’ll find a Vector Clip and Mag Clip. Pull the Lever to open the door on the other side of the greenhouse. Leave the secret passage the way you came and if you run forwards you’ll spot a Viper Clip on the walkway in the corner. As you pick it up a Carnivorous Plant will take a swipe at you but should miss if your quick enough. Head up the stairs and go through the door you just opened. Push the Button to open the next door which leads to a large incubation chamber.

When you enter the incubation chamber a Mutant will break out of one of the tanks. If you kill the mutant you’ll be attacked by 6 Bugs that come out of the chutes on the side walls. I found it easier to just run past the mutant.

Make your way along the walkway for another 2 Mag Clips. Come back to about the half-way point and jump up to grab the pipe. Traverse along and drop down to the walkway in the center of the chamber. Walk around to the right and turn the Valve. Turn around and head back the other way. Hop over the two small gaps and then turn the second Valve. This opens up a trapdoor under the tank where the mutant came from.

Either climb down the broken ladder and drop down (Lara loses about half health), or return to the floor the way you came. Find the tank with the open trapdoor and drop down.

Climb out of the pool and go through the passage. Slide down the ramp and jump across to grab onto the ladder. Climb up and pick up the Small Medipak at the top. Open the door and follow the passage around to another door that leads to a narrow room above a pool with walkways.

First take a running jump across the gap on the right. Turn around and shoot the Guard who should be patrolling down below. Jump back the way you came or down to the stairs and run up to where you entered. Jump across to the vines in the corner. 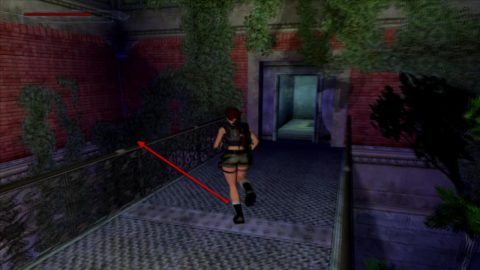 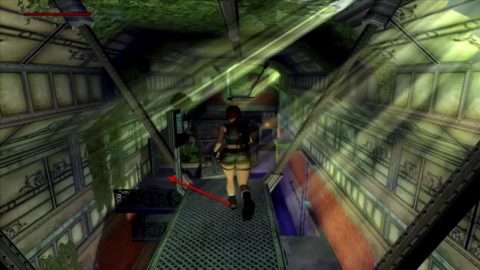 On the other side of the plants you’ll find Viper Clips, Mag Clips and Health Pills. Drop down through the opening or climb down the ladder. Walk down the steps and turn to face the pipe just above the pool below. Take a standing jump onto the landing with the ladder leading into the pool. 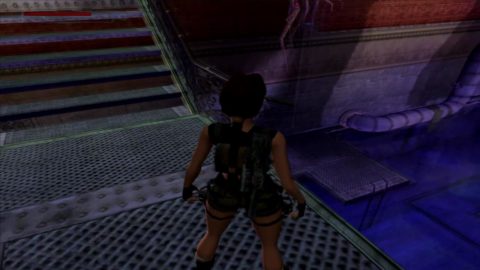 Jump onto the pipe, pick up the Mag Clip and then turn the Valve to shut of the steam coming from a pipe on the opposite side. Jump back to the platform and run up the two sets of stairs. Head around to the left and take a running jump over the gap.

Walk along the thin ledge by the wall and climb up the pipe to grab another thin ledge. Traverse across to the left and pull up onto the platform. Save the game before attempting the next climb.

Climb up the vines on the wall. Once you pass the first overhang climb to the left and then up again. Once Lara reaches the roof she’ll turn around. Monkey swing forwards and drop onto the moving platform. You should have just enough strength to make the climb.

Run along the walkway for a short cut-scene. The mutant vine has closed the exit and is blocking the doors.

Drop down the hole or climb down the ladder. Under the platform to the left you’ll find a Mag Clip. Head up the stairs above the mushrooms for the valve puzzle. Push the workbench away from the noticeboard. Take a look at the noticeboard for the various combinations. You want to use the one with the red X marked over it. 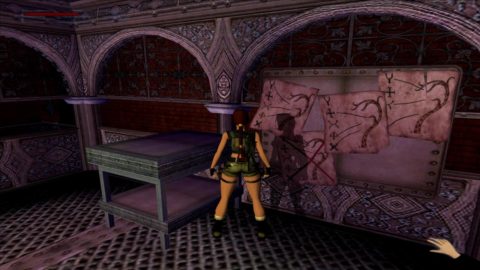 From the left turn the 1st Valve, 2nd Valve and 4th Valve. Pull the Lever to feed the concoction to the mutant vine. It will release the doors and shrivel up. Go through the double doors into the large room with walkways.

To get past this area you’ll need 3 access passes. You should already have one. Guards also patrol this area. Start by taking out the Guard patrolling to the right. He drops a Botanical Low Access Pass. Climb onto the garden area just to the left and climb up the ladder to the walkway. Run around to the left and head up the 2 sets of stairs. Up the top you’ll see square ledges on a sloped roof. 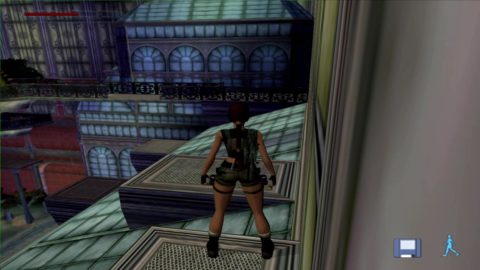 Pull up and run around to the left. There should be a Guard on patrol near to the large plants. When you get close to the ledge on the other side of the plants Lara will say that she won’t make the jump. You’ll need an upgrade first.

Pick up the Large Medipak, turn around and take a running jump across the gap. Now that you have the strength upgrade you can make it all the way across with needing to grab the edge.

Climb up the vines, grab onto the vine-covered ledge and traverse across to the left. Pull up onto the walkway and run forwards for a cut-scene.

Continue along the walkway to the dead Guard and pick up the Botanical High Access Pass. At the end of the walkway you’ll find Viper Clips. Turn around, run back and drop down to the walkway below.

Run back around and down the stairs. Run forwards to the end of the walkway where there’s a gap in the railing and safety drop to the stairs below. You’ll lose about 30% health. There’s another Guard patrolling down here so take him out and pick up his Botanical Medium Access Pass.

Head around to the left and pick up the Mag Clip before climbing down the broken ladder and dropping to the ground.

When you drop down turn around and run up the steps to the right. Continue to the far corner with the mushrooms and go through the exit to the right. You’ll see three card slot readers. Use all of them, you should have all 3 Access Passes by now, and the large doors will open.

Continue down the passage and down the stairs to a steam room. Head down the next two short flights of stairs to the left. There’s poison gas down here so you’ll need to move quickly. In the corner just before the small pool of water you’ll find Vector Clips.

Drop into the water, swim through the tunnel and climb up the ladder out of the pool. Pull the small box out and use it to climb up through the hole in the platform above. you’ll find Health Pills and Bandages in the lockers.

Drop back into the water and return the way you came, through the steam room and up the stairs. Continue ahead and run up the other set of stairs. Go through the doors to the airlock. Press the Button and go into a second airlock to end the level.