The Hall of Seasons II

From the Earth section slide down the ramp and pick up the V-Packer Shells in the passage below. Make your way out to the main hallway.

The main hallway is a ring filled with traps and lava. If you do a loop around the ring you’ll need to get past a spiked wheel, blades, lava pits and a hammer block. In some of the other side passages you’ll find more ammo and health. Make your way to the door you unlocked with the crystals. It’s on the interior wall of the ring. Follow the spiral staircase down and open the doors to a furnace.

To turn on the machine you’ll need to pull the four valves, one for each of the signs. When you enter the room walk along the walkway to the left and turn the Air Valve. Walk back towards the entrance and take a running jump between the pipes to the inner walkway. 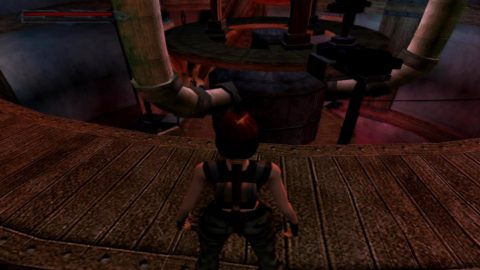 Run around to the other side and jump up to grab the chain overhead. Traverse across and drop down on the walkway on the other side. Climb up the ladder to the left and turn the Water Valve.

Head back down the ladder and take the other ladder going down. Walk out towards the center and take a standing jump to grab another chain. Traverse across to a lower inner walkway. Around the left side you’ll find the last valve, the Fire Valve. Once you turn this valve the machine will start working.

To avoid the blades walk backwards and drop off the edge. Turn around on the spot. Walk towards the chain and then climb up the ladder on the left. Climb the next ladder and then up the stairs the way you came in. Pull the Lever to open the door and go up the spiral staircase back to the main hallway.

You can go either direction to find the elevator but I found it easiest to go right. Enter the third passage on the left and pull the Chain to operate the elevator. It will get stuck halfway but that allows you to pick up some Bandages and V-Packer Shells. Pull the chain again and go through the two doors.

The Hall of Seasons

Now that the machine is working in the basement you’ll see four moving pillars around the center of the main hall. Climb up onto the shortest pillar when it’s at its lowest point and then take standing jumps make your way up the other three pillars. When you reach the tallest pillar take a jump up to grab the metal ring above. Walk along the metal beam going out from the ring that has a flat surface.

Jump over the railing and run along the walkway to the right. An Undead Knight will burst out of the wall and start chasing you. Head up the stairs and turn left onto another walkway.

Run around the walkway to the left, dodging past another 2 Undead Knights along the way. When you reach the end climb up the wall, up and to the right. Go as far right as possible and drop down onto the small ledge below. Pulling the Lever opens the door back in the walkway at the top of the stairs. You can climb back down the wall and run around to it or just take a standing jump from the far edge of this ledge onto the walkway below. Save your game before you try it.

Go through the door you just opened for V-Packer Shells. Push the wall on the left for an Upper-Body Strength Upgrade. Inside this room you’ll find a Large Health Pack. Run back around the walkway and climb up the wall to the little ledge like last time.

Drop down onto the ledge to take a break and then climb straight up the wall. Now Lara has the strength upgrade she should be able to make the next couple of climbs. When Lara reaches the top of the roof she’ll turn around. Continue forwards and veer to the left. You’re aiming for the small rock ledge on the left wall.

Drop down onto the rock ledge for a break and then turn so that Lara has her right side towards the wall. Jump up and climb forwards while veering to the left. When Lara reaches end of the overhang she’ll turn around and start climbing up the next bit of roof. Climb up and drop down onto the ledge to the left. Lara should have just enough strength to make the climb. If you’re having trouble try to stay as far right as possible when Lara reaches the end of the overhang.

Turn around and go through the door which opens automatically when you get close. Follow the path around to the left, up the stairs and into a chamber with statues. Lara will read the inscription on a coffin.

After Lara reads the inscription Brother Obscura will appear. He attacks by charging towards Lara. If you stay crouched you should be safe. You can crawl around and pick up all of the loot, a Large Health Pack, 4 Boxes of V-Packer Shells and the V-Packer Shotgun if you don’t have it already.

The goal is to grab the Obscura Painting from one of the statues but the problem is the painting teleports to another statue when you get close.

Find the statue with the painting and crawl as close as you can to it without it teleporting away. Shoot Brother Obscura until he gets stunned for a few seconds. This takes 21 or 22 shots with the shotgun. Save your game and count each shot. 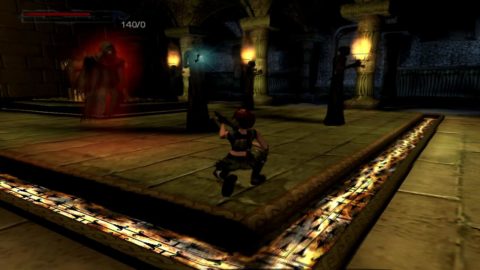