As you explore the galleries you’ll come across a number of Security Guards. the K2-Impactor works well against them as you’ll only need to hit them with a single shot to stun them.

Make your way up the stairwell and take out one, maybe two, Security Guards, depending on whether the Security Camera spots you or not. The door half-way up the stairwell can’t be opened until Lara has the strength upgrade. Continue up the stairs and follow the corridor around to the door leading to the first gallery.

Laser tripwires are all throughout this gallery. Begin by taking a jump onto the first display case. Turn left and take a jump to grab onto the top of the frieze. Pull up and pick up the Large Health Pack. 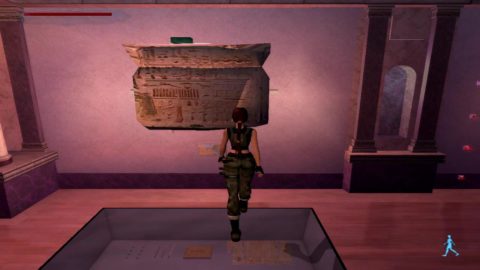 The lasers ahead turn on and off. Wait until they’re about to turn off and take a standing jump onto the next taller display case. Hang off the right side and traverse across to the right. 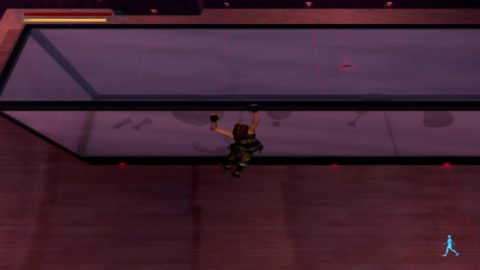 After the cut-scene you’ll be in the foyer of a vase gallery. You can sneak up on the guard inside but I didn’t bother. You can just run through the lasers and shoot the Security Guard with the K2-Impactor. Another Security Guard rushes in when you trip the wires. Take him out as well. The first guard drops the Louvre Low Security Pass.

Head out the other exit towards the statue of a woman. Be careful of the security camera to the right. Stay out of the red light and run behind it for a Large Health Pack. Go back to the vase gallery and go through the door to the left about half-way down.

Dodge past the next security camera into a gallery with the Mona Lisa. Head towards the glass case and pull it along the wall to reveal the button behind it. 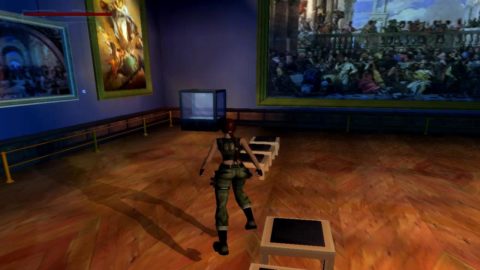 Lara will gain the Lower Body Strength Upgrade and now be able to push the large glass case in the center of the room. Push the large case towards the Mona Lisa until it hits the small stools.

Push the button that was behind the smaller case and you’ll see the lasers turn off. Quickly turn around and run towards the side of the large case. Climb up and take a running jump to grab the top of the case with the Mona Lisa before the lasers turn back on. Crawl into the ventilation duct.

Follow the ducts around to the right and continue until you see another small duct. Crawl through it and climb up the yellow ladder. Kick open the next grate that opens out to the rooftops. There’s a Security Guard walking around out here. You may be able to sneak up on him or just shoot him if he sees you.

From the vent turn right and climb up on the air conditioning unit. Climb up onto the vent, turn towards the wall and jump up to grab the ledge. Pull up and walk along to the right. You’ll need to drop down and shimmy to the right to get past the decorative grill work.

When you reach the cable jump up to grab it and traverse across to the ledge on the other side. When you make it Lara will receive the Upper-Body Strength Upgrade. Walk along the ledge to the right and climb down the drainpipe between the gap for a pickup.

At the bottom turn around and go up the steps. Open the mesh door and go down the other side. Turn right and smash open the blue door at the end. Inside you’ll find Bandages.

Make your way back to the drainpipe and climb up it to the top. This time get off to the right. Pull up onto the ledge and jump across to the walkway. Run to the end towards the cage and use Action to pry off the lock on the grated door. Open the door, climb up on the air conditioning unit and crawl into the vent. 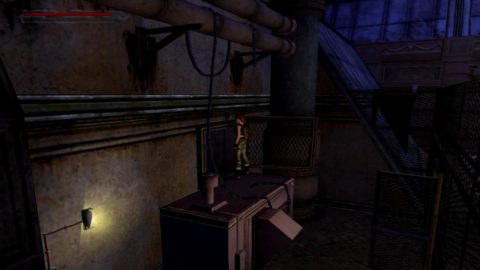 Follow the vent around and climb down the ladder. Continue forwards until you can drop down to a storage room below. There’s nothing here so open the door and kill the Security Guard on the other side. Turn left and run down the hallway. Open the second door on the right. Run through the glass doors and take out the Guard in the Security Office.

Use the left computer to spy on Margot Carvier’s Office. Use Action and Jump keys to zoom in and out and the Cursor keys to move the camera around. Zoom in on Margot’s computer and read the post-it note. You’ll see the numbers 14639. This is the code for her office door. Press Duck to disengage from the computer. You can look at the other monitors as well but there’s not much to see.

Leave the office, turn right at the hallway and use the Keypad. Press the numbers 14639 and go in. Open the cabinet on the right side of Margot’s desk to find Carvier’s Security Pass.

Use the computer to gather some information about the paintings. You can also view the Workbench for more details about the engravings. When you’re done snooping around leave the office and run down the hall to the door on the opposite side. Now that you have Carvier’s Security Pass you can use it on the card reader and open the door.

Run down the stairwell to the bottom and then through a door into a foyer. Open the door on the right to another gallery and take out the Security Guard inside. Run to the other side of the gallery and use the card reader to open the door. To the left is the vase gallery that you’ve been through before.

Run down to the other side of the vase gallery, taking out the Security Guard along the way. Use the card reader by the barred door on the left to open the bars and go through to the first gallery. Run to the other side and head down the stairs where you entered the level. Now that you have the strength upgrade you can bash open the door about half-way down. Inside you’ll find a Small Medipak and Bandages on a display at the end of the room.

Run back up the stairs and go through the first gallery and then through the vase gallery once more. In the foyer at the end use the card reader on the door to the left. Head down the stairwell to the bottom. There’s an open door about half-way down where a Security Guard might spot you. If he does take him out and continue down the stairs.

At the bottom of the stairwell open the doors and run to the left. Veer to the right and head towards the blue metal doors leading to the dig site to end the level.