The Forgotten River is an important area and connects several locations together. You have Castle Nex to the east, Twigroot Forest to the west, Sleet Island to the north and Keelbreach Bog to the south. On the northeast side of this area you’ll find the stairs leading down to the Hub. The river running down the center divides this map in half.

The monsters inhabiting this area are the Air Elemental, Crowern, Viper Root, Warg and Wyvern. There’s one Power Gem to find as well as a few weapons and various pieces of armor. 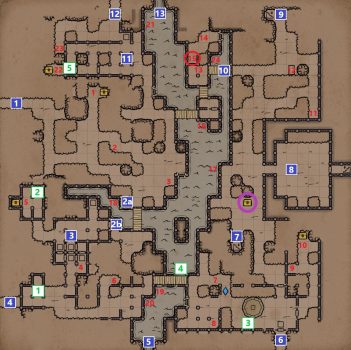 2: Throw a stone, or other item, west over the river from 2a to the pressure plate. This opens the gate at 2b.

3: Shrine of Entanglement. The shrine consists of four plates and raised bars between them. The sparks must have a clear path to the receptacles on the walls on the other side. Step on the plates in this order. Northwest plate, north plate, southeast plate, south plate and southeastern plate.

Press the Button and the sparks will fly into the receptacles, deactivating the Windgates blocking the path to the south. Continue south and then east over the bridge to the Crystal of Life.

7: Stairs down to the Cache, a Treasury in the River Tunnels.

8: Courtyard of Castle Nex. You’ll be back here later. For now just take a look around.

9: Stairs down to the Hub in the River Tunnels. From here you can quickly teleport back to Shipwreck Beach, and other locations once they’ve been unlocked.

10: Jump into the river to the north and walk to the north. Climb up the ladder onto dry land and grab the Power Gem. Drop down into the water and come back to the south to find a ladder back up.

11: Shrine of Pain. Spikes rise and fall in a pattern looping around the pillars. You will need to move quickly between the spikes to pull the lever between the two grates. This opens the gate on the other side of the shrine.

1: In the southwest corner press the hidden button on the east wall. A windgate will appear. Take it to be teleported to a sealed room to the north. Unlock the chest and look inside for Rogue Gloves and Thraelm Tribal Legplates. Stay here for secret 2.

2: Press the secret button on the east wall. This opens a wall back in the previous room. Go back through the windgate and through the wall that just opened up to the west. This takes you to a secret in Twigroot Forest. Blow the Horn of Summoning on the circle to fight the 4 Golems. After defeating them grab the Tome of Knowledge.

3: On the wall south of the hidden fountain you’ll find a hidden button. Press it to open the gate to the east. Go through it and follow the path to find a chest with the Rogue Hood and Fire Bomb.

4: Drop off the bridge into the water on the north side and flip the lever. This opens a gate on the south side of the bridge where you can pick up the Reed Legmail and 3 Frost Bombs.

5: Press the hidden button on the wall in the southwest section of the Shrine of Pain. This lowers the gate to the west so you can get to the chest with the Bearclaw Gauntlets and a Shield Potion.

1: In the Herder’s Den under Keelbreach Bog you’ll find a map marking a spot near some bridges and just south of a rock. The spot is just south of the rocks near to the courtyard. Inside you’ll find Reed Sabatons, Chees and 3 Shurikens.