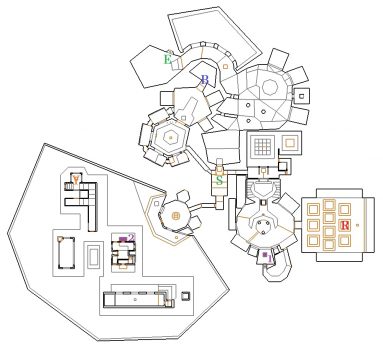 From the Start pick up the Shotgun and run backwards as fast as you can down the lifts. This is the best way to avoid the four Chaingunners. Now slowly take the lifts back up and take out the Chaingunners as you go. You might be able to use the lifts to isolate one of them.

Once you get back to the Start press the Skull Button to lower down the central lift. This reveals a Shotgun Guy and Chaingunner. Take them out and then ride the lift for some shotgun ammo. Take it back down to the Start. From here there are two ways to go, the left lift and the right lift. The left lift is optional but I’ll assume you want to explore that area first.

Take the left lift up and follow the tunnel to a circular pit. Drop down, take out the Specter and press the Skull Button to lower the platform. Get on it and ride it to the top. When you step forwards to pick up the MegaSphere all the windows around the platform will open up. Quickly turn to face the window with the Imps and dash across to them. 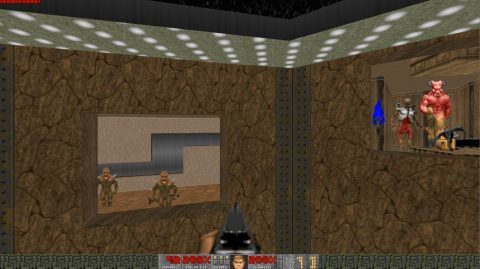 Pick up the Super Shotgun and take out the Imps. Make your way around anti-clockwise and clear out the side rooms. At the bottom you’ll find a Backpack and Skull Button. Press the Skull Button to lift up some poles which will act as steps so you can reach the highest room. 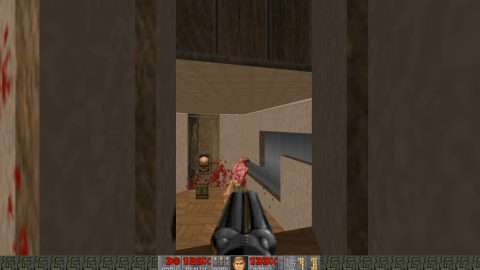 Make your way back up but look out the window from the second room from the top. You can probably spy the Baron of Hell and Revenant in the top room. Its easier to snipe them off from here rather the face them once you get to the top. 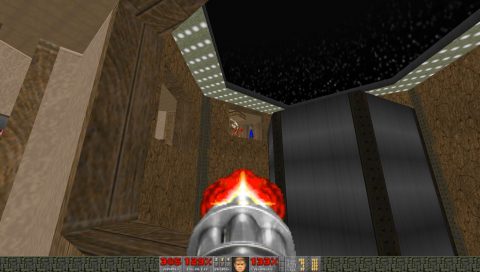 Head up to the next room and lower the step. This also lowers half of the ledge by the window. Ride it up and then run across the little steps to the highest room. 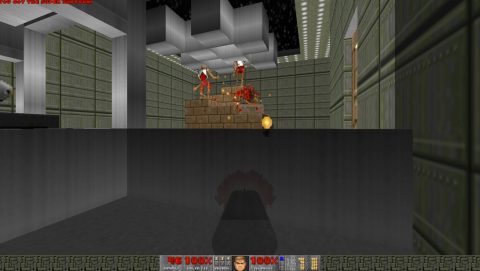 Open the door to the right and follow it around to another door that leads around to where you killed the two Revenants. Step through but then step back again. A Pain Elemental will be released to your left. If you’ve picked up a Beserk Pack already you can easily punch it to death.

Continue through to the spiral steps and take out the enemies around the corner to the right.  Watch out for the Revenant behind the black structure and the Chaingunners and Imps in the small pit.

When you climb up the spiral steps and walk off towards the black structure the structure will lower, revealing boxes of Rockets. When you step onto it and off again a small ledge in front of the Rocket Launcher will also lower. Quickly stand on it to be lifted up. 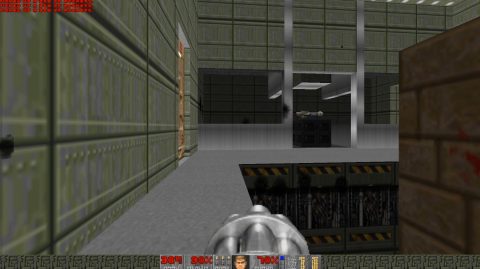 Grab the Rocket Launcher and walk off the other side. The wall in front of you will open up revealing a large area to the south. Use your Rockets to take out as many enemies as you can. Focus on the 2 Pain Elementals first but watch out for charging Lost Souls.

Open the Blue Door and press the Skull Button. This lifts up a bridge on the other side of the room. If you drop down to the floor on the west side an alcove will open up with Specters and Demons. If you drop down on the eastern side a door will open leading to a room with pillars. Once you step inside you’ll be locked in until you can press the Button to open the exit.

The pillars in this room drop down when you get close to them, revealing enemies on top. Be very careful how many enemies you release. The pillars closer to you have smaller enemies and the pillars on the other side have larger enemies. The pillar with the Red Key has an Arch Vile on top. 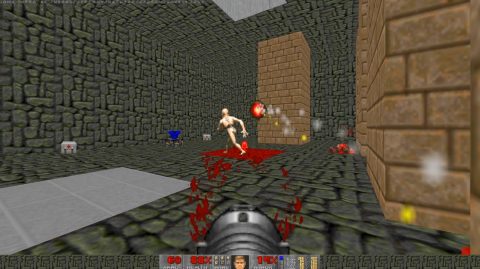 Make sure you clear out the rest of the room before going for the Red Key. Watch out for the Blue Armor as well. This will lower the ground floor for the entire room and release even more enemies from the alcoves to the north and south.

Lower the pillar with the Red Key and pick it up. When you do that the end wall will open up releasing a bunch of Revenants. If you’ve already lowered the floor they may be too high up to bother you.

Ride the pillar with the red key up and press the Button. This opens the exit. Lower yourself down and ride the pillar on the other side of the room closest to the exit. When you’re high enough dash across to it back to the previous room.

The bridge in the center that you lifted up with the blue key can be lowered by clicking on it. Ride it up and grab the goodies on the platform. When you run off the other side more windows open up with yet more enemies. Take them out and then run across the bridge to the other side.

Go through the passage to the left but watch out for the Baron of Hell and Revenent that get revealed once you’re in the passage. Let them fight it out amongst themselves and finish off whoever’s left. Follow the passage around and pick up the SoulSphere for Secret 1.

Now that you have the Red Key make your way back to the Starting area and take the lifts down to the Red Door. Go through and get ready for the second section of this map.

Follow the short passage to a small circular room with two windows. There will be many enemies trying to shoot at you through the windows so try to pick them off one by one.

The central pillar of this room can be lowered down for a Plasma Gun. When you pick it up two alcoves open up, each of them has a Revenant inside. The two alcoves have two Buttons. One of the Buttons opens up one of the bookshelves leading outside and the other raises up a step so you can get out the window and dash across the ledge to the ground below.

Once you feel like you’ve taken out enough of the enemies on the surrounding buildings dash out the window and over the ledge to land on the ground below. Turn around and quickly take out as many enemies as you can. 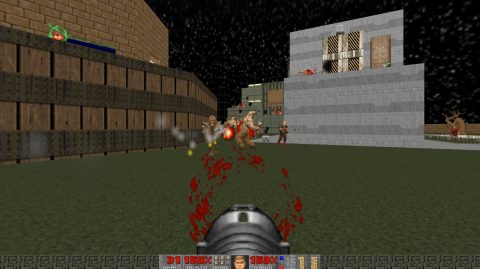 Spend some time running around the outside area and clear out all the enemies. When you’re done look for the building with blue vertical stripes and go inside. 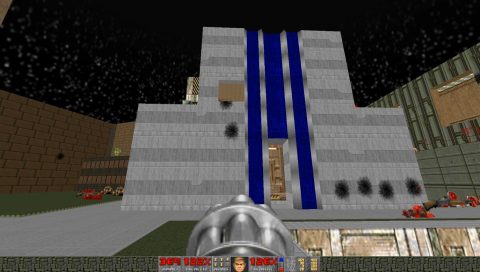 Open the door, take out the Hell Knight and then ride the lift up. Open the door and dash across to the other building. Lower down the ledge with the blue triangles, watch out for the Shotgun Guy and lower the lift to get inside the building. 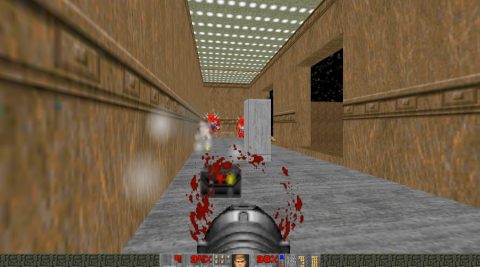 Take out the enemies and grab the Beserk Pack to replenish your health. Pressing on the Button raises up some steps in the building with the Yellow Key.

Head out and go back into the building with the blue stripes. Take the lift up and open the door to the outside ledge. Lower down the wall to the left and ride it up.

Open up the grate for some Rockets and then open the next grate to the right. As you step forwards a window will open to the outside revealing Lost Souls. Take them out and then carefully walk around the outside ledge to the left. Grab the SoulSphere and continue to the next window. 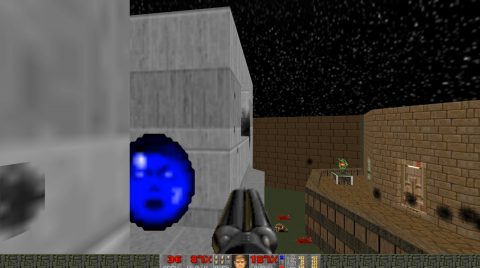 Open the window and go through. Take out the Lost Souls and open the wall just to the right of the Skull Button. This is Secret 2 where you’ll find an Energy Cell Pack.

Make your way back down and enter the building with the Yellow Key. Head up the steps all the way to the top. Hit the Skull Button which I think lets you get back out of this area.

Grab the MegaSphere and then make a strafe run through the two windows to grab the Yellow Key. It’s a difficult jump so it may take a couple of attempts. 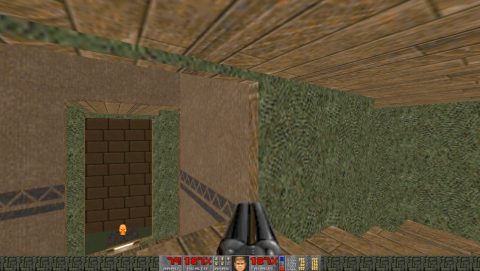 Take the lift in the corner of the next building up to the Yellow Door and open it. The walls around the building will lower revealing numerous enemies inside.

Run away from them and find the small black structure. One side will be open and inside you’ll find an Arch Vile. You want to take him out first. Inside you’ll also find a Computer Area Map.

Now you can head back and take out the rest of the enemies. When you’re done make sure you hit the Button in the corner of the structure that you just opened up. This opens a path to the final area of this level.

Press on the ledge where you entered this area to ride it up to the small library. Head through the passage back to the red door and ride the lifts back up to the Start.

This time press on the Button in the center and ride the lift up. A new passage will have appeared leading to a new section. 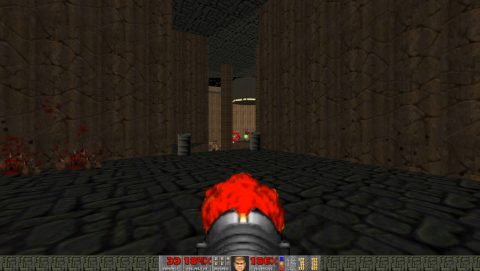 Take out all the enemies and then head down the steps next to the platform with the Barons of Hell. In an underground room you’ll find a Button. Hit it to activate the crusher above.

Make your way around to the left but avoid the teleporter. It teleports you to the platform with the crusher.

Ignore the enemies outside or take them out if you wish. Run up the steps to the MegaSphere. This reveals a Cyberdemon and also opens up more rooms around the outskirts of the large open area.

Run back to a safe position and wait for the Cyberdemon to walk over the teleporter. It will teleporter to the platform with the crusher and get crushed. Take out any remaining enemies and head back up the steps to the Exit.