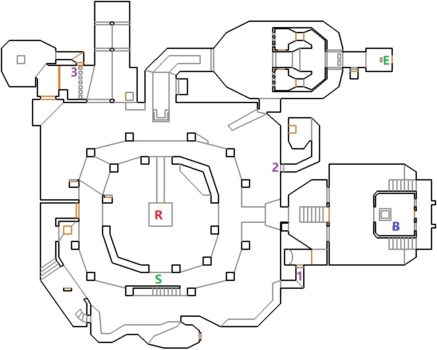 From the starting location shoot a rocket at the infantry on the center platform to kill them quickly and then make a loop around the circle, taking out all the infantry along the way. Do another loop around and this time take out any Lost Souls, Cacodemons or other enemies you can see in the surrounding areas. Find the walkway to the east and go through. 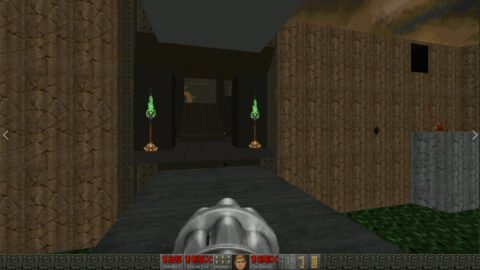 Take out the Imps and watch out for the Imp that comes out from the wall behind you. It’s an illusory wall that hides a Soul Sphere. Head up the stairs and take out the two Arachnotrons. Walk up the steps on either side and carefully enter the room with the Blue Key. An Arch Vile will appear. Take him out quickly with your most powerful weapon and avoid his flame attack at all costs.

When you head back down the second set of steps towards the circle a lift will lower on the south side. Take the lift up and press on the south wall for Secret 1. From here you can drop down to the ledge and pick up an Invisibility Sphere. Drop down to the slime water and go up the steps back to the circle.

Just to the north of the walkway an entrance has opened up to Secret 2. Ignore that for now and head through the Blue Door to the west. Press the Button to lift up the ledge with the Health Flasks and walk across it. 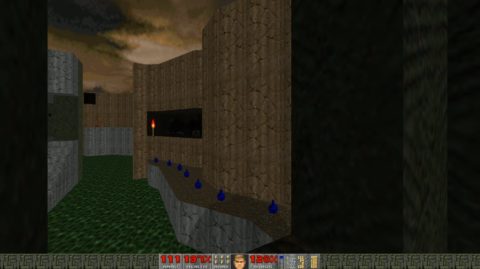 Take out the Specters and press the Button to lift up a walkway to the center platform with the Red Key.

Drop down to the slime and enter Secret 2. Inside you’ll find boxes of Rockets and a teleporter. Go through the teleporter to be taken up to a ledge above the circle. Grab the Energy Cells and then dash across to the central platform. Grab the Red Key if you haven’t already.

Next go through the Red Door in the north west corner and take out the enemies inside. 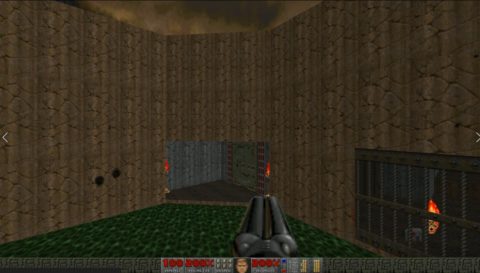 There’s a Hell Knight behind a gate. Take him out now but you’ll pick up the Invincibility later. The large bars lift up when you get close to them. Hopefully you sniped off the Lost Souls from the circle earlier otherwise you’ll need to deal with them now.

Make your way up the steps and kill the Revenant. Hit the Switch to lower the pedestal and pick up the Rocket Launcher. Head to the left to pick up the Backpack and use the BFG to take out the 2 Pain Elementals.

Before continuing on backtrack to the large bars that lift up when you get close. Press the wall to the north to open up Secret 3. This leads to the cage with the Hell Knight and the Invincibility.

Pick up the Invincibility and quickly make your way back to the path where you killed the Pain Elementals. Continue forwards and drop down. Use the BFG two or three times until all the Cacodemons are dead. There’s a couple around the sides as well.

Drop down and before heading to the Exit take the Teleporter to the right. Grab the Soul Sphere and then walk back. 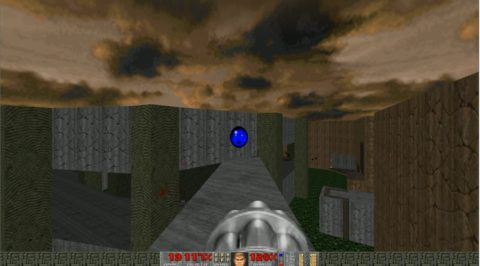 Drop down to the dark room and down to the area with the lifts. Pull the Switch to end the level.