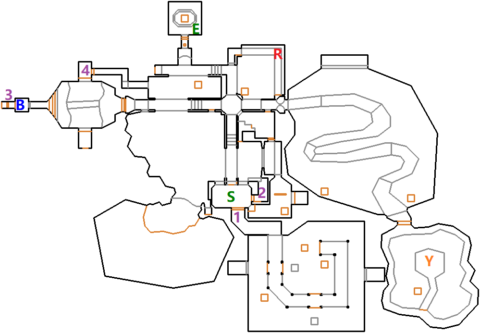 The Abandoned Mines is a tricky little level with lots of floors that raise and lower. From the start look through the bars to take out the Chaingunners and Lost Souls. From this room there are two secrets.

Secret 1 is just behind you to the south. Press on the panel on the wall and go through. Take out the chaingunners and Lost Souls first. Walk all the way around and get close to the edge at the very end but don’t fall off. A couple of rooms will open up with Cacodemons and a Pain Elemental. Quickly go back and take them out. 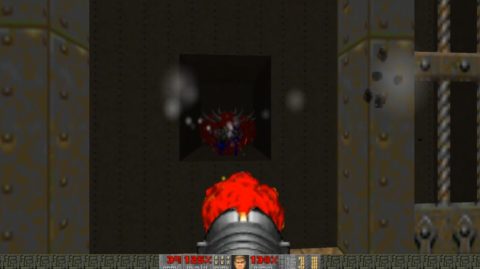 Now that the trap has been dealt with drop into the slime and go through the teleporter. Dash forwards to the Plasma Gun and then towards the walkway. That’s it for this room so head back to the Start.

Press the Switch on the wall to lower down the floor. Take out any enemies down the path. There’s at least one Cacodemon and a couple of Chaingunners wandering about. Once they’ve been dealt with make sure the floor is lowered and press on the wall to the right (east) for Secret 2.

Follow the path around to the next lowering floor. Lower down the floor and press on the electrical panel to open up the next area. Just ahead is a teleporter. This takes you to the outside area. The Button on the wall opens a corner wall back to the Start. So you’ve taken one little loop around. Go through the teleporter to the outside area and clear out the enemies. 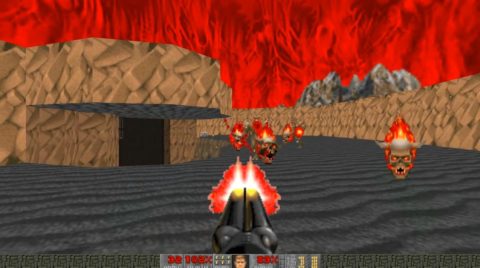 Before you drop down the gap make sure you clear out the barrels and Mancubus below. From down here you can take out the Chaingunners across the other side of the slime pool.

To get back across the slime run around to the right and press the Button. This opens a door on the other side of the slime. Run across and go through the door before it closes. You’ll be at the Red Door.

Just to the east is the hub for this area. Take out any roaming enemies and from here clear out the Imps in the room to the north-east.

Go to the north and up the stairs to the left. Press the Button at the end and come back. The Button opens up a door to the Imp area. Go inside and pick up the Red Key.

Drop into the slime and go through the teleporter back to the Secret 2 area. Make your way back to the hub.

Head to the west and go through the Red Door. When you run across the room the floor disappears. Make your way up the steps and take out the Baron of Hell. He’s guarding the Blue Key.

Press on the wall and hit the Button behind the blue key for Secret 3. Cacodemons will be released from ledges to the left and right.

Once you’ve taken them out press the Button again. Turn around and ride up the lift on the right. Press the Button up on this ledge to lift up part of the floor again.

Drop down, press the Button and this time ride up the lift on the left. Up on the ledge you’ll find the Blue Armor. Press on the wall to the east for the final secret, Secret 4. Follow it around to a Soul Sphere and take the teleporter back to the hub.

There’s one area left to explore, the cavern to the east. Go through and take out the Cacodemons, Lost Souls and Imps. You may want to use a BFG to take them out a little quicker.

Open the Blue Door at the end of the walkway and take out the Mancubus, Lost Souls, Cacodemon and Baron of Hell. 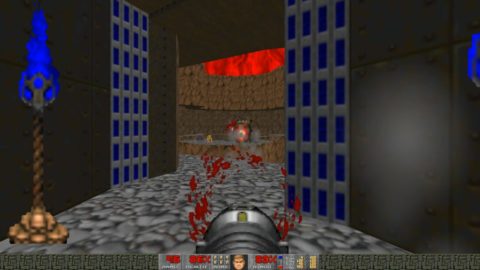 Once the room is clear run around to grab the Yellow Key. You may want to drop off the edge and take the teleporter back to the start of this section because Cacodemons will be released from the side walls.

Either way finish of the Cacodemons and go back to the hub. You should have all the keys now so go north, west and open the Yellow Door to the right. Drop into the Exit to complete the level.