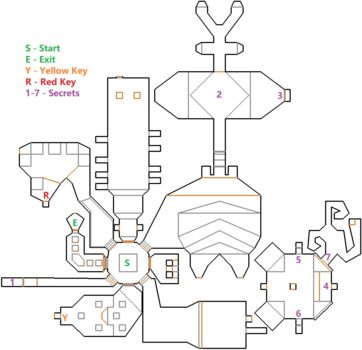 You start in a round room surrounded by 8 doors. Two of them require keys to open. Open the door to the left of the Red Door. This leads to a long, thin corridor with a Cacodemon in it. Take it out and pick up the Chainsaw at the end. The wall will open revealing a Baron of Hell. It teleports behind you when you get close to it. Take out the Baron and then head to the end of the corridor for Secret 1. Head back to the circular room.

The next door to the left leads to a room filled with Barons of Hell and a Cyberdemon. When you enter the door will lock behind you. Stay quiet at the back and the Barons will fight with the Cyberdemon, eventually killing it. 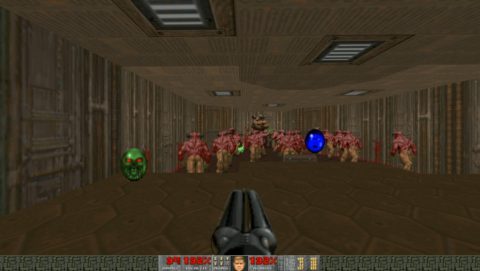 When they turn around quickly pick up the Invincibility Sphere and finish off the remaining Barons. Pick up the Yellow Skull at the back of the room and hit the Button to be let back out again.

The next room to the left has a chamber filled with Imps. If you move towards them they’ll notice you and start teleporting behind you. Only a handful will teleport at a time so you can use the Super Shotgun to keep them at bay. When you’re done drop down into the pit and hit the Button at the back to open the door back to the circular room. There’s an invisible teleporter near the edge of the pit that teleports you back to the entrance.

Skip the next door to the left for now (the door to the east), you’ll want the BFG for that room. The next door to the left (north east) has dozens of Demons up on a ledge. If you go to the back of the room to pick up the goodies stairs will appear and the Demons will be released. Instead kill the Demons first and then pick up the loot. When the stairs appear go up to the top and hit the Buttons. One of them opens a door at the back of the room. This leads to a secret but there’s still a second door blocking the way.

Head back to the circular room and take the next door to the left (north). There’s a single Shotgun Guy here. When you kill him a dozen Cacodemons will emerge from the walls.  Take them out any way you wish and then run to the back of the room for a Plasma Gun and a Button. The Button opens the second door in the previous room.

Head back to the room with Demons and go through to Secret 2. You’ll notice a Soul Sphere up ahead. When you get close to it The walls will open and Demons will pour out. Use the Plasma Gun to thin down the heard. I retreat back to the narrow corridor to not get surrounded. When you’ve cleared them out shoot the symbol on the east wall. It will lift up revealing a BFG behind it. Clear the area out to the north. There’s a few Shotgun Guys and four or five Backpacks with ammo.

There’s one more optional room with the remaining 4 secrets. From the circular room enter the room to the east. There are two teleporters but you want the one in the center. Shoot the center wall to lift it up and reveal a secret teleporter. Go through to be teleported to Secret 4. 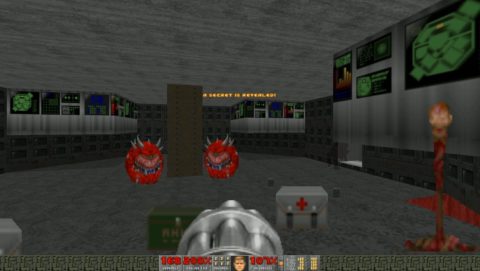 Drop down and quickly shoot the faces on both sides of the central pillar. This opens up areas around the edge of the room with Pain Elementals. Use the BFG two or three times until they’re all dead.

The small alcoves to the north and south are both secrets, Secret 5 and Secret 6. Kill the Specter in the water and then drop into the pit and open the secret door on the north side. This is Secret 7. Quickly grab the Radiation Suit and explore these few tunnels. Head through the teleporter when you’re done.

Now that you have all of the secrets take the teleporter back to the central room and go through the Yellow Door. Quickly grab the Red Skull Key and run to the north-eastern side of the room. Walls will lower releasing Imps and Barons. To the north east is an Invincibility Sphere. Use the BFG to clear out the Baron and grab the invincibility. Now you can safely clear out the rest of the room.

Head back to the circular room and go through the Red Door. The path leads to the exit but when you stand on one of the platforms they’ll lower into the slime. You’ll need to move quickly to make it across. Open the door at the other end, kill the Demon and hit the Button to exit the level.